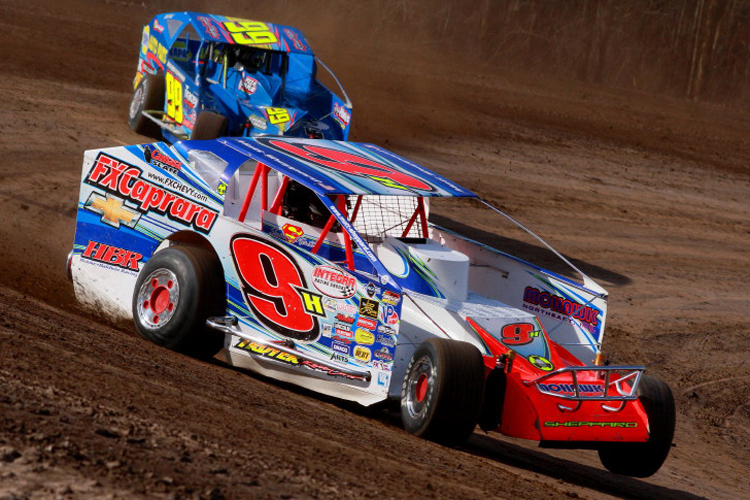 VERNON, NY- This past Sunday, April 19, a new era kicked off at the Utica-Rome Speedway under the new ownership of Bill and Kim Shea and the crowd in attendance were treated to some great racing with the majority of the main events in doubt until the checkered flag dropped. Matt Sheppard was victorious in the first Stampede Steakhouse Modified Twin 20 event while defending NASCAR Whelen All-American Series NY State Champion Stewart Friesen survived a dogfight to score the win in the second 20 lap main event. In the Open Sportsman, defending champion Jeremy Vunk held off Steve Way to score the win while Rocky Warner fended off a furious charge by AJ Filbeck to win the 602 Sportsman main event. Mark Effner led the majority of the Pro Street Stock event to score the opening night win.

The first of the two Stampede Steakhouse Modified Twin 20 feature events came to the green with the duo of Erick Rudolph and Larry Wight leading the field. Rudolph led the first lap, but an early caution that involved five cars slowed the pack. On the restart, Wight found a groove and took the lead away from Rudolph while behind them the rest of the top five began to shuffle with Justin Haers, Ryan Phelps, and Matt Sheppard all fighting for position. Sheppard won the battle and began to pressure Wight after putting Rudolph behind him. Another yellow on lap eight gave Sheppard a chance to pull even with Wight, and he took advantage, jumping out into the top spot when the green flag waved.

As the race entered the second half, the defending track champion Stewart Friesen was making moves and finding his way into the top five. By the 13th circuit Friesen was in the final podium spot behind Sheppard and Wight. At the front of the field, the top two battled in lap traffic, both choosing the bottom line. On the final lap, Sheppard pulled away while Friesen fought Wight for the runner up spot. With Sheppard receiving the win, Wight held off Friesen, with Danny Johnson and Rudolph finishing in the top five. Phelps, Matt Billings, Pat Ward, Jimmy Davis, and Haers rounded out the top ten.

The second of the two Modified features rolled out with an eight car inversion, leaving Ward and Billings on the front row. Ward took the early lead at the start, with Phelps taking second. A slow machine on lap four brought the pack back together, and Ward held the lead with Friesen jumping up into second from his sixth starting spot. Ward dropped to the bottom of the speedway while Friesen took to the top. After a five lap battle, Friesen was able to take the top spot on the high side. Ward wasn’t going away, however. He stuck with the leader, still fighting on the low side of the racing surface.

Behind them, Sheppard was looking to double up on the night as he entered the third spot. As the top two was beginning to deal with the back of the field, Sheppard was gaining ground, closing in by lap 16. The last caution for the Modifieds came out on the 17th lap, with a machine slowing on the front stretch. With the field bunched back together, Sheppard was able to stick with the top duo as they separated themselves from the rest of the pack. He was able to take second when Ward opened up a lane on the bottom on lap 18, and going into the final lap, the top three were on Friesen’s rear bumper. All three went into the final turn side by side, but Sheppard spun exiting the turn. Friesen was able to hold on to the victory, followed by Ward, Wight, Billings, and Haers. The rest of the top ten was filled out by Rudolph, Mat Williamson, Tim Fuller, Vic Coffey, and Mike Mahaney.

Jeremy Vunk and Claude Hutchings Jr. led the Open Sportsman to the green, with Vunk jumping out to the lead over Hutchings. A caution on lap four slowed the field, but Vunk was able to pull away again, with Steve Way battling for second with Hutchings, coming from his eighth starting spot. The two battled back and forth for half the race, but Hutchings pulled off with undisclosed issues. Vunk cruised to a victory, followed by Way, Heath Carney, Jack Miller, and Mike Stiles.

A.J. Filbeck and Alan Fink brought the now weekly 602 Sportsman division to their first feature of the year. Fink and Filbeck battled into the first turn, with Filbeck coming winning between the two. Rocky Warner, coming from his third starting position, was gaining ground on top two, using intermittent cautions to his advantage. After another caution on the 10th lap, Warner was able to pass Fink for second and began closing in on Filbeck, taking the lead on lap twelve. Warner took home the win, with Filbeck, Fink, Matt Janczuk, and Dave Marcuccilli trailing.

The Pro/Street Stock feature began with A.J. Digsby and Mike Welch taking the green. With a caution at the beginning of the race, Mark Effner was able to make two passes and find the lead on the opening lap. With Effner opening a large lead, the rest of the field began to shuffle, with Digsby, Chris Carr, and Welch all vying for the runner up position. A final caution slowed the field, but it didn’t matter to Effner as he took the win, with Welch, Carr, Digsby, and Roch Aubin following.

Next week on April 26, Gates-Cole Insurance present another exciting show Stampede Steakhouse Modifieds, Open Sportsman, 602 Sportsman, and Pro Street Stocks. Gates will open at 3:30 p.m. with racing at 6 p.m. For more information, log on to www.uticaromespeedway.com or call the speedway office at (315)829-4557.