A NEW ERA WILL BE USHERED IN THIS SUNDAY, APRIL 19, AT THE UTICA-ROME SPEEDWAY AS BILL AND KIM SHEA START FIRST SEASON AS OWNERS OF THE POPULAR TRACK 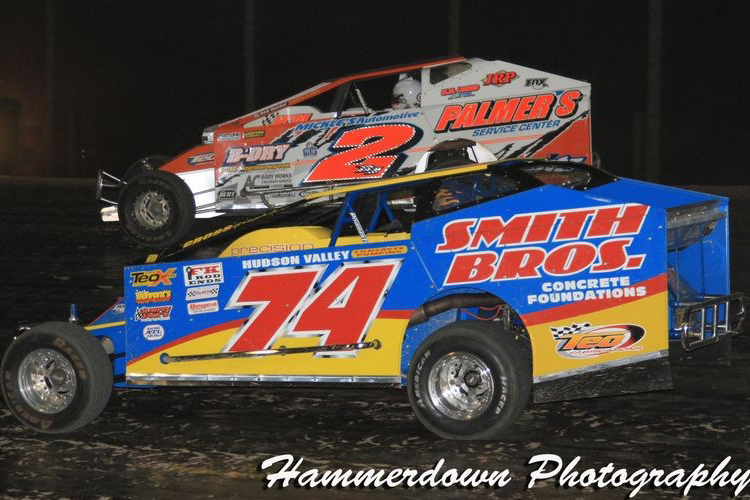 VERNON, NY- Last fall, it was announced that after guiding the Utica-Rome Speedway successfully for over a decade that Gene and Gloria Cole agreed to sell the legendary oval to Bill and Kim Shea. This Sunday, April 19, the Shea era will begin with an exciting show of NASCAR Whelen All-American Series racing that feature Twin 20 lap features for the Stampede Steakhouse Modifieds plus a regular show of 602 Sportsman, Open Sportsman, and Pro Street Stocks presented by Tri Valley beverage.

Both Bill and Kim Shea have been involved for years at the track as both spectators and car owners, most recently for former champion Willy Decker. Now as they takes the reigns of the popular Sunday night track, they look to continue the high standards that the Coles started. Several changes were made during the off season, including the switch to Hoosier which are used at the surrounding tracks for the Modifieds. The Open Sportsman will still use the American Racer tire and are eligible for the American Racer Cup for Sportsman. Also the sail panels for Modifieds will no longer be allowed. Probably one of the most significant changes will be on the spectator side of the fence. Taking what Gene Cole experimented with at the end of the 2014 season, the Shea’s have expanded on the admission pricing for children with kids 16 and under admitted for free every Sunday with the exception of the Night of Legends on August 16.

Over the past two seasons at the Utica-Rome Speedway, Stewart Friesen and Matt Sheppard have finished first and second in the point standings, with Friesen taking the championship both times on his way to five consecutive titles. The most impressive part is that when facing each head to head during that span, the duo is only separated by a mere 10 points over two seasons. That rivalry will continue this Sunday as Sheppard will be looking to break through to claim the $13,000 plus track championship, his first since his 2002 rookie season at the Vernon oval. While much of the focus has been on the top two, there will a host of other drivers looking to Friesen’s stranglehold on the championship. One of them is Pat Ward, a two-time UR Modified champion, along with his young teammate Larry Wight. Second generation racer Mike Mahaney also plans to be in the mix as well. There is an influx of drivers expected this season to compete for the lucrative point fund, which last season totaled near $50,000 for the Stampede Steakhouse Modified division when combined with the NASCAR Whelen All-American Series contribution. Friesen pocketed over $27,000 after also earning the NWAAS New York State title along with his track title. This year’s field could rival the fields of the speedway’s asphalt heyday when the likes of Richie Evans, Jerry Cook, Lou Lazzaro, Maynard Troyer, and more found themselves competing weekly at the speedway.

Since announcing the addition of the 602 Crate Sportsman to the weekly lineup at the Utica-Rome Speedway banquet last fall, there has been a lot of excitement from the drivers that previously had only a few opportunities to compete at the speedway a few time a year. Full fields are expected with all the interest and it is anybody’s guess who will be the first ever champion in the division. Matt Janczuk should be the favorite though with his experience at the Vernon oval in the more powerful Open Sportsman and Modified division, including championships in the Sportsman. Rocky Warner should also be considered a favorite as he is a top runner wherever he shows up. The championship picture will be a lot clearer in a couple months and it should be an exciting race to the finish.

In the Open Sportsman class, defending champion Jeremy Vunk will return to defend his title but young Claude Hutchings Jr. is looking to add his name to the champions list. A few other expected to part of the weekly field include Jack Miller, Steve Way, Michael Richmond and more.

With the combining of the Pro Stocks and the Pure Stocks into one combined Pro Street Stocks, it should be a wide open affair in the popular full fendered division. One thing is certain though is that the division will put on the great side by side action that has been the norm for the past few seasons.

Gates will open at 3:30 p.m. for the opening night of action with racing starting at 6 p.m.

For more information on the “Action Track of the East”, please log on to www.uticaromespeedway.com or call the speedway at (315)829-4557. We can also be found on Facebook and on Twitter at @UR_Speedway.