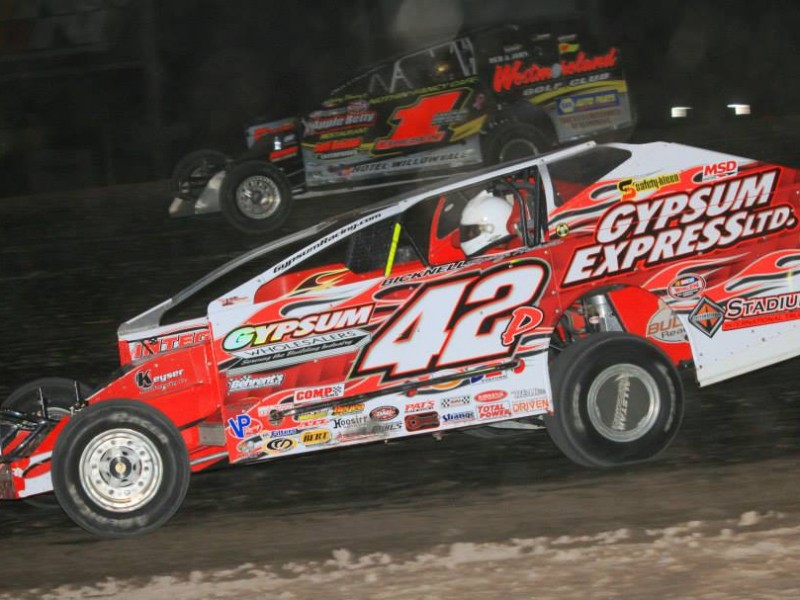 VERNON, NY- This Sunday, June 21, at the Utica-Rome Rome Speedway it will another round of fast paced NASCAR Whelen All-American Series racing when Quality Manufacturing and Marble Hill Inn presents the Stampede Steakhouse Modifieds, 602 Sportsman, Open Sportsman, and Pro Street Stocks. It is the perfect night to bring Dad to the races to help celebrate Father’s Day for some exciting short track racing.

Police officers, fire fighters, and correctional officers, current and retired, with proper identification will admitted to the grandstands for FREE! This is in honor of the daily sacrifices that are made by some special individuals on a daily basis.

In the weekly Stampede Steakhouse Modified point standings, Pat Ward is still shown as the leader with a five point lead over Matt Sheppard. Ward’s teammate, Larry Wight, is third in the standings over Mike Mahaney and Tim Fuller. Rounding out the top 10 in the quest for the $13,000 to win track title is Vic Coffey, Erick Rudolph, Stewart Friesen, Mike Bowman, and Matt Hulsizer. Sheppard leads the way in win column with four victories while Wight, Mahaney, Fuller, and Friesen all have one each. The race for supremacy in the New York State NASCAR Whelen All-American Series standings is a close one with Ward edging Sheppard by three points. John Fortin and Tom Rogers, Jr. from Riverhead Raceway and Jimmy Zacharias from Chemung and Holland Speedway round out the top five in the state rankings. Other Utica-Rome Speedway regulars in the top 20 in the state standings include Wight (7th), Mahaney (10th), Fuller (13th), Rudolph (16th), Coffey (18th), and Friesen (19th).

With four wins, Rocky Warner leads the way in the 602 Sportsman standings by a mere three points over Matt Janczuk. Cody Clark, AJ Filbeck, Alan Fink, Glenn Forward, Nick Krause, Daryl Nutting, Kyle Kiehn, and Connor Cleveland round out the top 10 in a very stout field of Sportsman. Filbeck, Cleveland, and Eric Giguere all have found victory lane once each.

The Open Sportsman have seen some parity so far this season with five different winners in the six events held. Currently, Steve Way and Claude Hutchings, Jr. are tied atop the standings while Heath Carney, Jack Miller, Jeremy Vunk, Randy Shantel, Mike Richmond, Tom Tophoven, Craig Pope, and Lucas Heintz give chase. Hutchings is the only driver with multiple wins with two victories while Way, Carney, Vunk, and Shantel all have one win each.

Glenn Forward is the current point leader in the Pro Street Stock division by just six points over Mike Welch. Mark Effner is in the third spot with AJ Digsby and Chris Carr filling out the top five spots. Rounding out the top 10 is Bill Mason, Travis Welch, Ed Ostrander, Gus Hollner, and Ernie Staelens. Forward has four wins so far this season with Welch and Effner each grabbing one win each.

For the Kids Club, several local Mixed Martial Arts competitors will be on hand to show young fans their talents making this an entertaining show for fans of all ages.

Gates for this Sunday’s show open at 3:30 p.m. with racing set to begin at 6 p.m. Adult admission is just $13 with military, senior citizens, and students at $10. Kids 16 and under are free.

Don’t forget, coming up on Wednesday June 24 is the only midweek show of the year with the return of the Super DIRTcar Series after a 12 year absence. Track regular Matt Sheppard is the current point leader that will see stars such as Brett Hearn, Billy Decker, Jimmy Phelps, Danny Johnson, Peter Britten, Keith Flach, Justin Haers, and many more come in to challenge the track regulars for the $6,000 to win main event. Four time NASCAR Camping World Truck Series champion Ron Hornaday will also be on hand for autographs.

For more information on these two events and much more, please log on to www.uticaromespeedway.com or call the speedway office at (315)829-4557. Utica-Rome Speedway is located on Route 5 just east of the village of Vernon and host racing every Sunday from late April to early September.