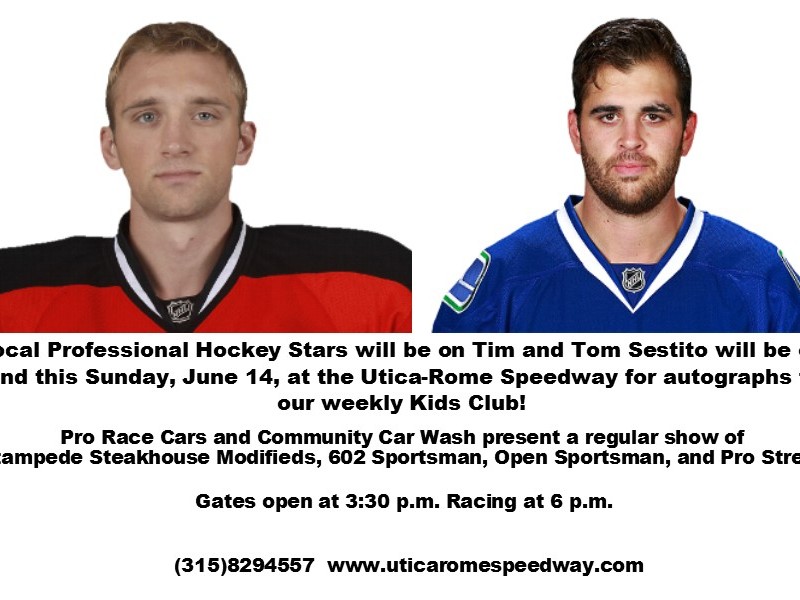 Central New York isn’t normally known as a hotbed for professional ice hockey but with the current Calder Cup run by the local Utica Comets and the Stanley Cup Finals that features the Syracuse Crunch parent team Tampa Bay Lightning with many former Crunch players on their roster, hockey is currently a hot commodity locally. Two local Rome products who happen to be brothers, Tim and Tom Sestito, have both spent time in the National Hockey League and even both local American Hockey League franchises.

Tim Sestito, the older of the two siblings, started his pro career as an undrafted prospect playing in the ECHL in 2005. His NHL career started in November 2008 as a member of the Edmonton Oilers before being traded to the New Jersey Devils in 2009. Since then, Tim has been with the Devils since, playing for both New Jersey and their AHL affiliate Albany.

Younger brother Tom was drafted by the Columbus Blue Jackets in 2006, playing most of his first season on the Syracuse Crunch roster. He also played in the NHL for Columbus plus for the Philadelphia Flyers and Vancouver Canucks and their AHL affiliates. Tom most recent pro hockey time was spent as a member of the Utica Comets this past February.

Remember, kids 16 and under are free this Sunday with adult admission just $13. Also, current and retired law enforcement officers, firefighters, and correctional officers will receive a free grandstand admission for this Sunday in appreciation of their service. Proper identification to prove service will be required. Gates will open at 3:30 p.m. with racing at 6 p.m.

Utica-Rome Speedway is located on Route 5, just east of the village of Vernon, NY and operates every Sunday throughout the summer. For more information on the speedway, please log on to www.uticaromespeedway.com or call the speedway office at (315)829-4557.