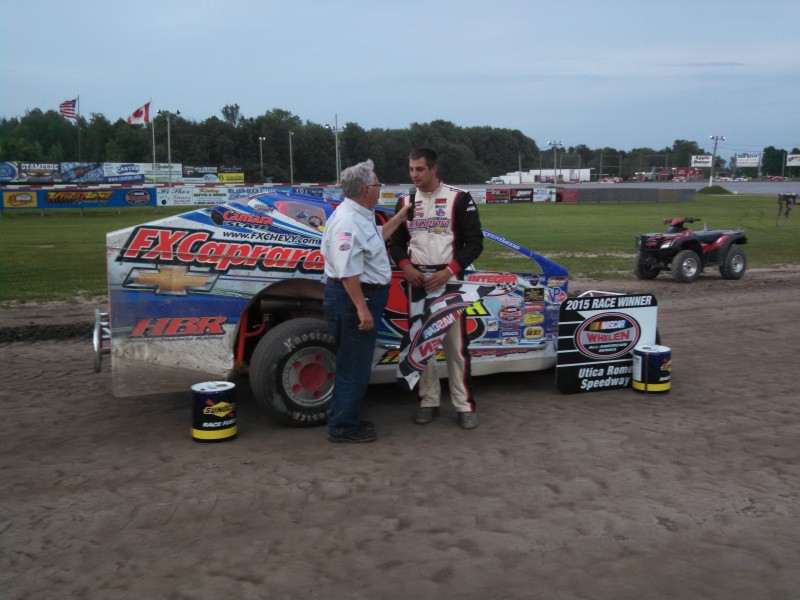 VERNON, NY- Hi-Skor Lanes, Joe’s Jerky, and Gates-Cole Insurance sponsored a night that saw Matt Sheppard win his third point race and fourth overall at Utica-Rome Speedway, once again closing the gap between himself and the point leading Pat Ward in both the track points and the NASCAR All-American Whelen state points. The point differential for the track points is now narrowed down to five points. Other winners included Heath Carney in the Open Sportsman, Rocky Warner the 602 Sportsman, and Glenn Forward in the Pro Street Stocks.

The Stampede Steakhouse Modified feature came to the green flag with the duo of Tim Mayne and Mike Bowman at the head of the field. Chris Mackey, starting just behind the front row, took the lead on the first lap, using the top side to his advantage. Behind him, Matt Sheppard mounted an early charge from his seventh starting spot and was in second as the first lap completed. Mackey stuck to his line up top, so Sheppard dove to the bottom. They battled back and forth, but Sheppard was slowly getting closer and closer to completing the pass, finally taking the lead on lap five. A caution on lap five for Stewart Friesen going off the top of turn two brought the field back together. After the restart, Larry Wight stole away second, using a lane higher than Mackey.

The top five, meanwhile, was shuffling as the race progressed into the second half. Tim Fuller was running strong and fought his way up to third. Matt Hulsizer was also running well, following Fuller in fourth. Pat Ward, the point leader at both the track and in the NASCAR state point standing, had navigated his machine to the top five after coming from 12th. He was followed closely my Mike Mahaney and a resurging Friesen after his mishap in the beginning of the race. The final ten laps were riddled with cautions, and each time Wight searched for a line that would get him to the top spot. He first tried to go to the top side, but when that didn’t work he dove to the bottom groove to try and get underneath the leader, but Sheppard was just too strong. Sheppard came away with the win and Wight settled for second. They were trailed by Ward, Mahaney, and Friesen. The top ten was rounded out by Danny Varin, Fuller, Hulsizer, Mackey, and Bowman.

Joe Orlando and Geoff VanRiper led the 602 Sportsman to the green in their feature event, with Orlando taking the lead at the beginning. Corey Barker, coming from third, charged to the front a lap later. He didn’t have time to enjoy his lead, however, as Rocky Warner was making moves toward the front, putting pressure on Barker. A caution on the fifth and sixth laps stalled the field, and Warner took advantage, taking the lead away from Barker. He was followed by Matt Janczuk, who took the runner up spot. Janczuk chased the leading Warner up until lap 18, when another yellow waved. Janczuk tried to catch Warner on the restart, but was unable to complete the pass. With Warner in first and Janczuk in second, Cody Clark, A.J. Filbeck, and Rocco Leone filed out the top five.

The Open Sportsman feature event was led by Craig Pope and Mike Richmond at the drop of the green flag, but neither could hold off an early charge from Heath Carney, who led lap one. A caution on the second circuit slowed the field, but Carney was able to hold onto the lead. Claude Hutchings Jr., coming from eighth, battled his way up to second and chased Carney as the laps ticked on. With another yellow on the 18th circuit, Hutchings tried his hand at taking the lead, but he didn’t have enough and Carney came away victorious. Hutchings settled for second, with Jeremy Vunk, Richmond, and Steve Way trailing.

Jerry Streeter and Travis Welch took the green flag at the head of the Pro Street Stock feature race. A yellow flag on the first lap stalled the race, but when everything got up to speed, A.J. Digsby was the leader. He didn’t have long at the front, however, as Glenn Forward fought to the lead after starting in 10th. Another couple of cautions slowed the race again, but Forward continued to hold off challengers as the race progressed into the final stages and to the finished. Second went to Mark Effner, who was followed by Mike Welch, Digsby, Ed Ostrander.