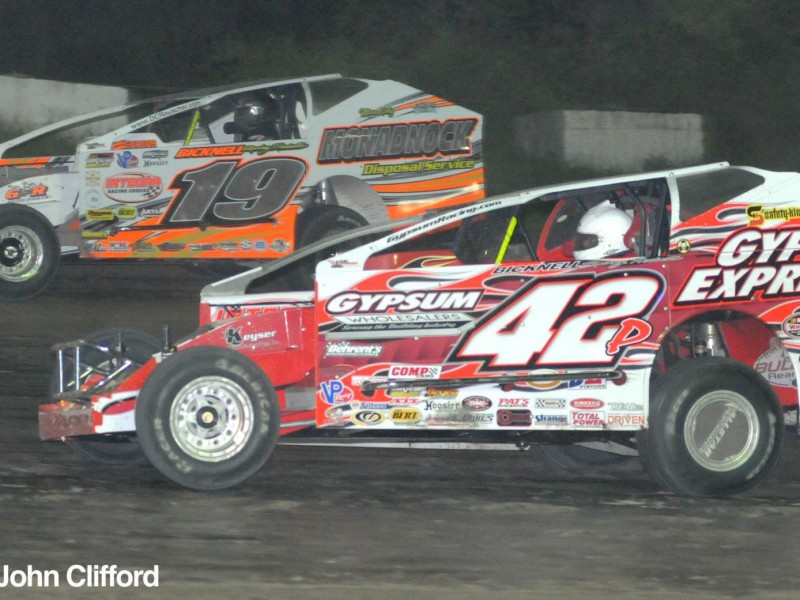 VERNON, NY- After a huge two day weekend of racing, Utica-Rome Speedway will get right back to racing this Sunday May 31 when NAPA Auto Parts and Gates-Cole Insurance presents another action packed night of short track racing. A regular show of Stampede Steakhouse Modifieds, 602 Sportsman, Open Sportsman, and Pro Street Stocks is planned. Once again, children 16 and under will be free for this Sunday’s event.

In the Stampede Steakhouse Modifieds, Pat Ward continues to be the leader in the chase for the lucrative $13,000 championship with Matt Sheppard sitting in the second spot. Larry Wight, Erick Rudolph, and Tim Fuller now round out the top five point positions. Filling out the top 10 is Mike Mahaney, Vic Coffey, Stewart Friesen, Mike Bowman, and Matt Hulsizer. Sheppard leads all drivers with three wins on the season while Wight, Fuller, Mahaney, and Friesen all have one win each.

Former Open Sportsman champion Matt Janczuk is the current 602 Sportsman point leader but by the slimmest of margins as he has just a one point lead over three time winner Rocky Warner. Young Cody Clark sits two markers off the point lead in the third spot with one time feature winner AJ Filbeck in the fourth spot. Alan Fink rounds out the top five in the standings with the rest of the top 10 spots held down by recent winner Connor Cleveland, Glenn Forward, Daryl Nutting, Kyle Kiehn, and Nick Krause.

The top of the Open Sportsman standings had a little bit a shakeup after this weekend’s action as Steve Way took over the top spot this past Sunday. Former point leader Claude Hutchings Jr. slipped to the second spot while Jack Miller, Randy Shantel, and Heath Carney, Jeremy Vunk, Mike Richmond, Tom Tophoven, Craig Pope, and Lucas Heintz round out the top 10 point positions. Hutchings is the leader in wins at two wins while Way, Shantel, and Vunk all have one win apiece.

After this past Sunday’s event, the top of the Pro Street Stock division standings tightened up after Glenn Forward pulled within two markers of point leader Mike Welch after winning his third feature event of the season. Chasing Welch and Forward in the standings is Mark Effner, Chris Carr, AJ Digsby, Bill Mason, Travis Welch, Gus Hollner, Bill Trexler III, and Ed Ostrander. Sunday’s win was Forward’s third of the year while Mike Welch and Effner each have one win.

Utica-Rome Speedway is located on Route 5 in Vernon, NY and is just minutes from the New York State Thruway. More information including full schedule information, full point standings, and much more make you log on to www.uticaromespeedway.com. The speedway can also be found on both Facebook and Twitter as well. To contact the speedway office, please call (315)829-4557.