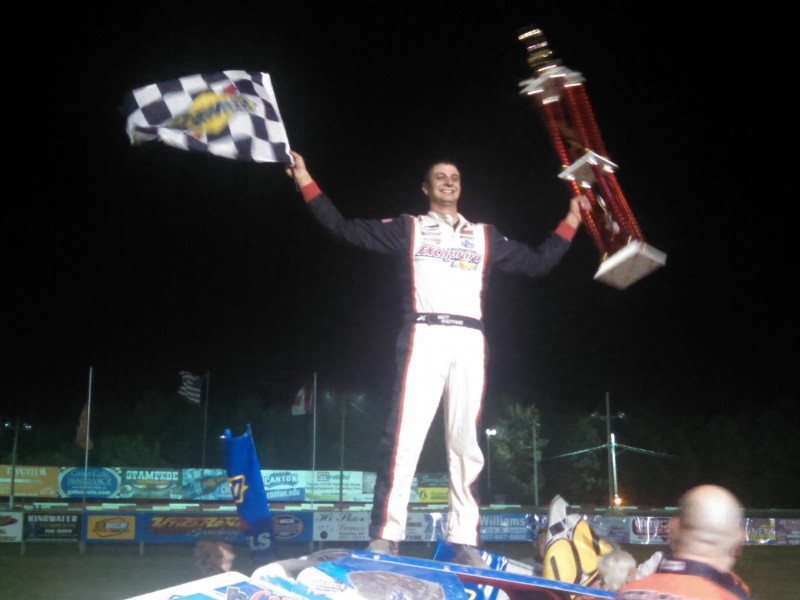 VERNON, NY- The second night of Victoria 200 weekend at Utica-Rome Speedway saw Matt Sheppard win the $10,000 payday after a dominating performance in the Sunoco Race Fuels Race of Champions 100 lap main event. It was Sheppard’s first win in a big event at the track, adding to his already impressive resume for the 2015 season. The night also saw the first race for the Upstate Sportsman Alliance Series, which was run in unison with the GRIT Sportsman Series. Eric Giguere won the feature event for the 602 sportsman.

The Victoria 200 Modified 100 lap feature event came to the opening green with Anthony Perrego and Brett Hearn at the head of the field. On the first lap, Perrego took advantage of his pole starting spot and took the lead on the bottom side of the racing surface. Hearn, however, was not letting Perrego drive away. Digging his right rear into the top groove, Hearn completed a pass of the top spot on the second circuit, opening up a lead. Behind him, Larry Wight was hot on his heels as he also overtook Perrego using the top. The first caution of the evening came out on the 13th lap as Stewart Friesen took a ride over the top side of turns three and four. The restart proved to be just what Wight needed, as he passed Hearn for the lead the following lap.

Wight attempted to build a lead after his pass for first, but he had some following in his tracks. Matt Sheppard after starting in fifth, had drove his way through the rest of the top five and was looking for the lead. Sheppard’s teammate, Jimmy Phelps, had also cracked into the top five and was in third by lap 20. Sheppard followed Wight as the two caught up to slower traffic, and took the chance to reel in the leader. With Wight still running a higher lane, Sheppard dove underneath the leader and emerged as the front runner on lap 28. Sheppard was able to create a sizable lead for himself, with Jimmy Phelps trailing. As the laps ticked away, Ryan Phelps, who had won a consolation race to start 21st, was navigating the pack. When the race hit the halfway mark, Ryan Phelps had worked his way into the top ten, sitting at eighth.

A few more yellow flags came as the race continued into the second stanza, but Sheppard was getting an incredible run off of the top side and was running each time the race was restarted. By the 70th circuit, the top two were being chased by Marc Johnson and Pat Ward. The top five didn’t change much as they worked their way through the rear of the pack for the next twenty laps. The final yellow of the race flew on lap 91, and the top five were bumper to bumper as Sheppard brought the field to the final restart. Sheppard once again got a great run out of the first two turns, and Jimmy Phelps did not have enough to catch him in the final laps. Sheppard took home his first big show victory at the speedway, and walked away with the $10,000 check. Jimmy Phelps finished in second, with Marc Johnson, Ward, and Ryan Phelps finishing an impressive run by rounding out the top five. Erick Rudolph, Friesen, Jimmy Davis, Danny Johnson, and Mike Mahaney filled out the top ten.

Eric Giguere and Rocky Warner led the Upstate Sportsman Alliance/ GRIT Sportsman feature to the start of their race. A spin would stall the start, and contact between Warner and Finch forced both drivers to the rear of the field. With the race once again underway, Ron Davis III took his machine to the front from his new position on the outside of the front row. Giguere stayed close, keeping up with Davis as the two pulled away from the rest of the pack. Giguere found space on the bottom and used it to his advantage as he took his starting spot back on lap 10.

With Giguere out front, Matt Janczuk was making moves to catch up with him. With lap traffic in front of the leader, Janczuk was able to close in on the leader. With 10 to go, Giguere was starting to feel the pressure from behind as Janczuk closed in. The two fought through the slower traffic, but Giguere just had too much for Janczuk to catch up to, and Giguere took the win. With Janczuk finishing in the runner up spot, Davis followed in third, trailed by A.J. Filbeck and Cody Clark.