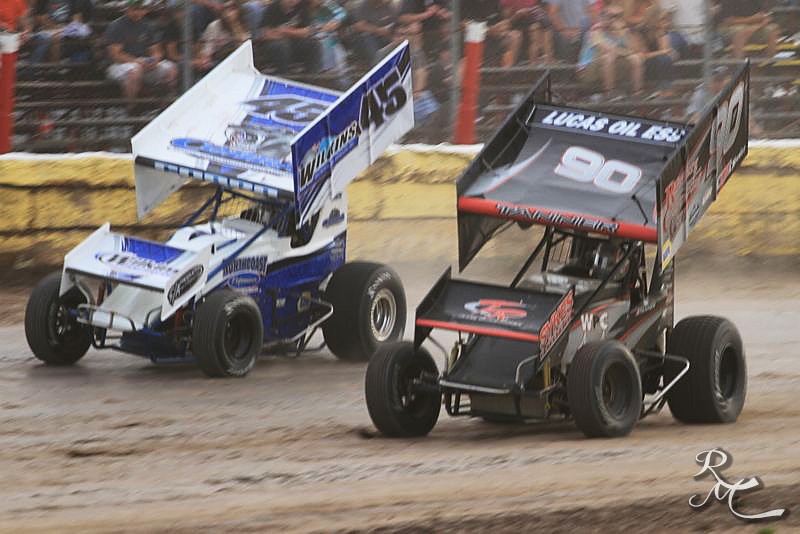 VERNON, NY – It’s been since 2012 since Chuck Hebing won a feature event at the Utica-Rome Speedway.  On Sunday night the “Cobra” kept things going in the right direction as he dominated the 25-lap A-Main event to score his second consecutive victory with the traveling stars of the Lucas Oil Empire Super Sprints.

The win paid him $2,150 and came as part of the SUNY Canton Racing series and the NAPA Auto Parts US Tour.  It was the second consecutive night that Hebing was able to keep former champion Steve Poirier behind him.

“We had a good car,” smiled Hebing.  “To beat my good buddy Doug (Emery) and (Stewart) Friesen at their track, Doug helps on this car, we did some changes and it worked for me.  It might not have worked for them.  My crew did a good job on this Panther Frameworx Chassis.  It was a good night.”

Davie Franek and Shawn Donath started on the front row of the feature with Franek taking the lead at drop of the green flag.  Franek worked the inside lane of the speedway as Donath attempted to hang with him on the top side.  The two battled for the first lap before Hebing worked by Donath for the runner-up position.

Hebing chased Franek for the first few circuits as Franek continued work low and Hebing stayed high.  They stayed in those lanes as they caught the tail end of the field by lap six.  Three laps later, Franek got hung up on the bottom of the speedway allowing Hebing to shoot by on the outside on the ninth lap.

Franek and Hebing battled while Donath closed in after falling back to third.  The three were together for the lead after the crossing line to complete lap 12 when the caution came out as Gordy Button went off the high side of the speedway bringing out the yellow.

“I wasn’t restarting very good,” stated Hebing.  “On that last one I took the bottom and that seemed to make the difference.  I started on the outside before that and spun my tires.  They all got a jump on me.  Restarts are important with this thing.”

When the green flag came back out, Hebing again bolted to the top spot as Franek searched around looking for a way by to get back to the top spot.  They were the top two when the final caution of the race came out on lap 18 as Donath spun on the top of turn four while trying to go for the second spot.

The final restart saw Hebing hold off all challenges as he raced to the top of the first and second turns.  As he did that Poirier moved from the fifth position up to the second spot on the top as well.  For the second time Poirier was forced to try and race down Hebing.

As the laps clicked closer to the conclusion Poirier was unable to mount a charge.  Hebing went on to score his second victory of the weekend and his 26th career with the Empire Super Sprints.

Poirier came home in the runner-up spot once again aboard his No. 28FM.  He tried several lines in the final laps but couldn’t gain on Hebing as his hot streak continued.

“I got a couple of good breaks,” stated the St. Mathieu de Beloeil, Que., driver.  “I restarted on the outside and the track kind of opened for me.  I didn’t feel like I had a good car but I could maneuver somewhat on the outside.  The bottom kind of went away and the cars running down there had to slow down.  We are really happy about finishing second again.”

Danny Varin, of Fonda, N.Y., snuck by Stewart Friesen on the final lap to finish in the third position.  Varin started ninth in the field and used every lane of the track to make his way on to the podium at the finish.

“These guys have been in the game a long time so finishing third to them is okay,” commented Varin.  “We are just learning.  My hats off to Dover Brake.   We had some motor problems but we hope to be here a lot more.”

Friesen ended up bringing his Doug Emery owned No. 33 home in the fourth spot while Matt Tanner continued his strong runs at Utica-Rome Speedway with a fifth place finish. Rounding out the top ten were Jason Barney, Larry Wight, who had a sure top five finish when he slid off turn four late in the race, Jessica Zemken, Franek and Bryan Howland.

ESS/Utica-Rome Notes: For the second night in a row, 26 cars made up the pit log…Making first ever ESS appearances were Pete Richardson and Denny Pebbles…Make first ESS starts in 2015 were Gordy Button, Jason Shultz, Wight, Howland and Paul Habeck…Doug Emery went home and changed engines after Fonda…Paul Kinney was missing as he was attending his best friends wedding…Next Week the Lucas Oil ESS gang will travel to the two Autodrome’s in Quebec, Granby and Drummond for events that pay $2,000 to win and $500 to start.