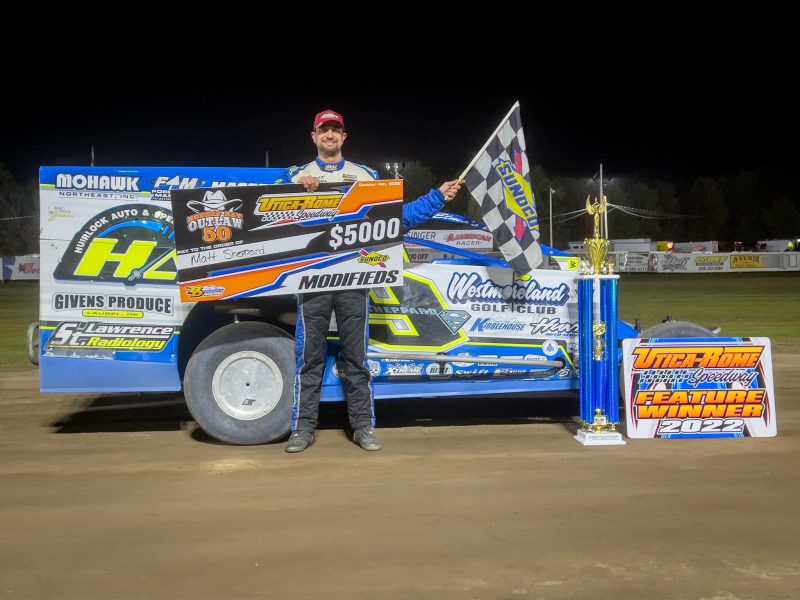 The Savannah, N.Y., resident raced from his ninth starting position to take the lead at the completion of lap 26 and drove away with a dominant performance for his record-setting 12th victory of the season.

“I’m just really excited for my team, we had an unbelievable year here at Utica-Rome,” Sheppard explained. “It’s been storybook. We’ve been a roll lately and this is a great way to kick off a busy stretch.”

The 2022 Sunoco Modified champion’s 12th win of the campaign at Utica-Rome set a record for the most Modified wins in a season at the Route 5 oval.

“That’s pretty special,” Sheppard said of the record. “All the history in New York State at all these different tracks. Just to have a small part of it; until somebody knocks me off, we’ll have the bragging rights.”

With Sheppard firing from the inside of the fifth row, Johnstown, N.Y.’s Rocky Warner and Genoa, N.Y.’s Will Shields occupied the front row following the redraw.

It was Shields who raced off the outside row to take the early advantage in the 50-lap affair.

The Modified rookie led the opening four laps before Warner used the inside groove to slide by and take the lead. Warner would race away with the lead while Sheppard was quickly attempting to march his way into the top five.

Sheppard began to battle with Queensbury, N.Y.’s Demetrios Drellos for the fifth spot while another pair of drivers were waging war for the final podium spot.

Wight raced around both Hackel and Shields to move into the runner-up position on lap nine. Shields moved to the bottom groove allowing Hackel and Sheppard to follow in Wight’s path around the outside of Shields’ No. 82s machine.

With Warner opening his advantage in lap traffic, Sheppard rolled his way to the front with Hackel and Wight separating himself from the leader.

Sheppard cleared Hackel on the 15th circuit around the half-mile clay oval before locking in on Wight. Four laps later Sheppard raced underneath Wight to take the second spot away on lap 19.

Sheppard quickly ate into Warner’s advantage as the halfway mark neared. Warner would lead the halfway point before Sheppard raced underneath Warner and took the lead away.

The race’s only delay would come on lap 32 as Unadilla, N.Y.’s Billy Decker was on his roof in the fourth turn. Decker climbed out of the car unscathed.

When the race resumed Sheppard picked up where he left off, winning by over seven seconds over the rest of the field and claimed the $5,000 top prize.

‘Lightning’ Larry Wight took home the runner-up spot in his F.X. Caprara Honda No. 99L and Demetrios Drellos rounded out the podium in his family-owned No. 111.

Rocky Warner claimed fourth in his Jason Simmons Racing No. 98 and Bobby Hackel rounded out the top five in his Killer Crate-backed No. 97.

Finishing sixth through 10th, respectively, were Covington Township, Pa.’s Alex Yankowski in his family-owned No. 84y; East Greenbush, N.Y.’s David Schilling in the BDR Speed No. 20 after starting 14th; Middlesex, N.Y.’s Alan Johnson in the Mark Spoor Racing No. 14j; Will Shields aboard his No. 82s; and Vernon, N.Y.’s Willy Decker in the JSD Express No. 1x.

Barney used a late race restart in a caution-filled 30-lap affair to slide by Jonathan Preston and take the $5,000 victory.

“The money doesn’t mean anything. Cole Cup wins and wins at Utica-Rome are what makes this one special,” proclaimed an emotional Barney in Victory Lane.

Preston held on for second and Matt Farnham, who set a new track record in his heat race, rounded out the podium.

Slosek started on the pole and never relinquished the lead in a non-stop 25-lap affair. Slosek won by nearly six seconds over second-place Chip Constantino.

Slosek, like Farnham, set a new track record in his heat race for the Crate 602 Sportsman at 19.483 seconds.

That concludes the 2022 season at Utica-Rome Speedway. Stay tuned with the ‘Home of Heroes’ all off-season thru the speedway website or Facebook page for updates throughout the winter.

Did Not Start: Tyler Thompson

Did Not Start: Willy Decker Jr.