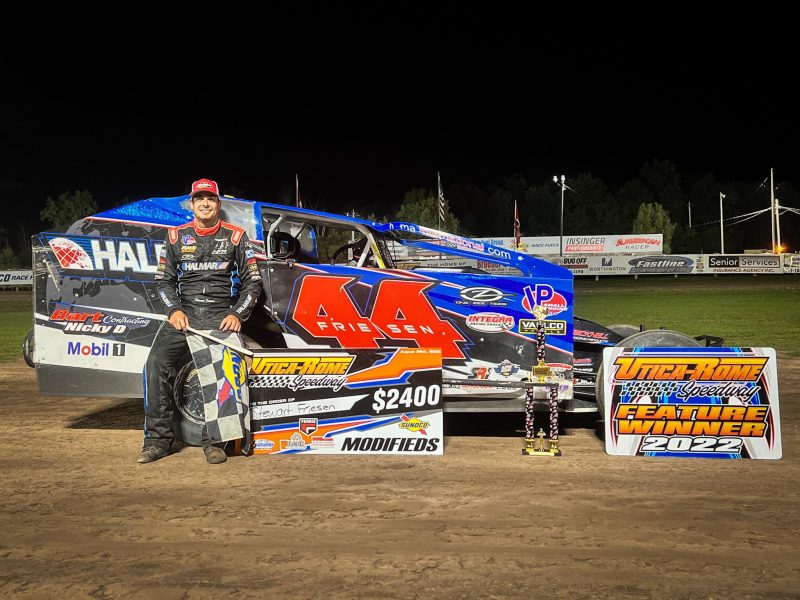 News from Utica-Rome Speedway – The Home of Heroes

For the 62nd time in his Utica-Rome Speedway career, Sprakers, N.Y.’s Stewart Friesen was victorious with the Sunoco Modifieds on Wilcox Sealing & Paving/Wilcox Construction LLC and Ferris Mowers night.

Friesen raced from the 10th starting position to claim his third win of the season, and his first at the ‘Home of Heroes’ since July 15.

“Really cool to be back here in Victory Lane, (Matt) Sheppard’s been on fire here and keeping the ‘9s’ behind us has been tough,” expressed a relieved Friesen in Victory Lane.

“There’s been a lot of supporters behind our deal but we’re finally starting to get our heads above water.”

With Friesen rolling from the outside of the fifth row, Fultonville, N.Y.’s JaMike Sowle and Norwich, N.Y.’s Alan Barker occupied the front row.

At the drop of speedway starter Joe Kriss’ green flag, Sowle quickly grabbed the top spot, while Barker faced a challenge from Duanesburg, N.Y.’s Ronnie Johnson for the runner-up spot.

Barker quickly pulled away from Johnson and ‘RJ’ came under fire for third from York, N.Y.’s Justin Wright.

Wright – a feature winner this season – raced around Johnson for the final podium spot and the top three settled in for the first half of the 30-lap affair.

With the top three in lockstep, attention turned outside the top five to Friesen. Friesen first raced around Johnson for the sixth spot when the field completed the eighth circuit.

Three laps later, Matt Sheppard was by Johnson as well and into seventh. The Savannah, N.Y., resident was coming to life after staying in his 11th starting spot for several laps.

While the two titans were maneuvering forward, the lead trio was entering traffic, bringing them all within car-lengths of each other.

Sowle, still leading, first approached Aaron Jacobs who was running in the top groove, Sowle dropped to the bottom and slid underneath Jacobs, bringing Barker with him, now on his back bumper.

The following lap, Barker was peaking a nose underneath Sowle for the lead before the race’s first yellow flag fell as Jacobs went over the turn one embankment.

Just prior to the yellow, Friesen had risen to the top five after getting underneath Alex Yankowski for the fifth spot.

Friesen went to work on the ensuing restart, as the Halmar No. 44 began to roll the bottom with ease. Friesen raced by Wright and Genoa, N.Y.’s Pat Ward reaching a podium spot.

Three laps later, as the field was completing lap No. 19, Friesen was underneath Barker to take the runner-up spot away.

Friesen used a slide job two circuits in the fourth turn to take the lead away from Sowle.

Friesen held the lead for good, pulling away in the final nine laps to claim the $2,400 payday and his 62nd career Modified win at Utica-Rome Speedway.

Barker claimed his best finish of the season, taking third aboard the Klinger Motorsports No. 77 machine.

Finishing sixth through 10th, respectively, were: Wright, taking his best finish since his win on Twin 20’s night; Covington Township, Pa.’s Yankowski, aboard his family-owned No. 84y; Ward in the Joe Beyea-owned No. 42p; Vernon, N.Y.’s Willy Decker who rose to the top-10 in the late stages of the race; and Johnstown, N.Y.’s Rocky Warner rounded out the top-10 in his Jason Simmons Racing No. 98.

Janczuk, after starting 16th, used multiple early race restarts to pick positions off before closing in on leader Josh Amodio. Janczuk raced around Amodio as the field completed the 10th trip around the half-mile and never looked back for his 11th win of the season.

Amodio held on for second and Gilbertsville, N.Y.’s Payton Talbot used a late-race charge to round out the top three.

After the first half of the 20-lap main clicked off caution free, a pair of midrace yellows gave Coonradt the restarts he needed to take the lead away.

On a lap-12 restart, Coonradt used the inside groove to slide up in front of Johnstown, N.Y.’s Jason Morrison for the lead and the win. Morrison held on for second and Averill Park, N.Y.’s Jay Corbin rounded out the top three.

The win gave Martin a firm hold on the points championship after his closest competitor, Zack Welch, dropped out with a broken front end.

Four Cylinders leading all 12-laps of the feature. Hunter Tarbania was the Single Cam winner of the event.

The Mohawk Valley Vintage Dirt Modified Series (MVVDMS) also joined the program for their one and only appearance of the 2022 season after the first scheduled visit was canceled on May 27.

Friday night racing concludes September 2 at Utica-Rome Speedway as the five weekly divisions conclude their championship chases along with the Slingshots on the inner oval.

Did Not Start: Joe Beyea

Did Not Start: Rocco Leone

Did Not Start: Darral Hulbert

Did Not Start: Frankie Brown

Did Not Start: Tex Gorden