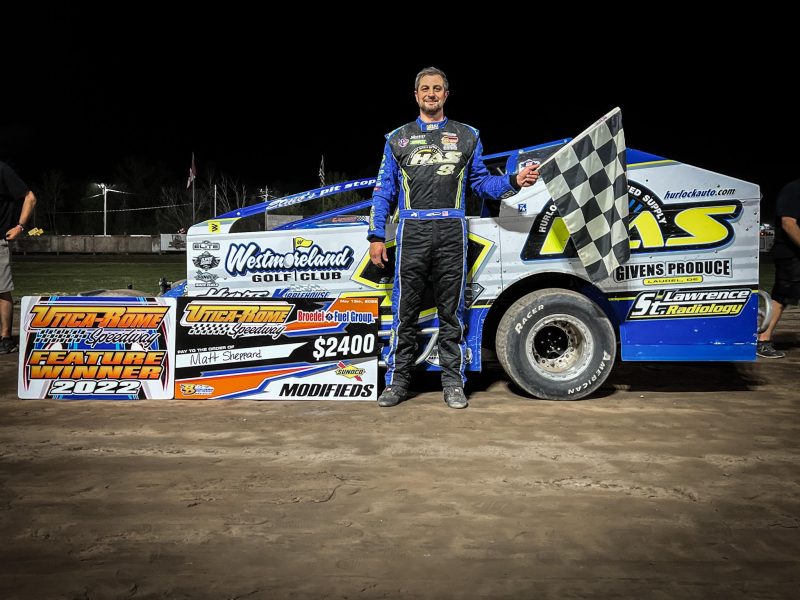 The Savannah, N.Y., star was victorious on Broedel Fuel Group & Energy night, driving from his 12th starting position to a dominant victory in the 30-lap main event worth $2,400.

“We really feel like we hit on something on Opening Night, and the car’s just been perfect ever since,” explained Sheppard of his continued dominance to open the 2022 campaign at the ‘Home of Heroes.’

Friday’s event was contested before a huge crowd on the first warm, sunny race night of the season.

Sheffield, Mass., resident Andy Bachetti and new speedway regular Alan Barker led the field to green for the Sunoco Modified 30-lap feature. Third-starting Darren Smith of Binghamton, N.Y., beat Bachetti to the line on the opening lap before the first caution of the race fell.

When racing resumed, Bobby Hackel IV quickly joined Smith up front. The lead duo paced the field for much of the first half of the race.

Gloversville, N.Y.’s Rocky Warner – who was charging from ninth – made strides before catching the top three just four laps in. Warner disposed of Bachetti quickly and began searching for a path to get by the top two.

With Smith and Hackel tucked to the bottom side of the speedway, Warner began maneuvering his way across the Route 5-oval in pursuit of the lead.

While Warner pressured the top two, Sheppard was kicking his racecar into high gear. Sheppard raced by Shaun Walker and Alan Johnson quickly to claim sixth, then quickly closed the gap to Alex Yankowski and Bachetti, looking to crack the top five.

Two laps after catching them, Sheppard raced by Bachetti and Yankowski both to take fourth away and lock eyes on the podium runners.

When lap 14 was completed, Smith, Hackel, and Warner were the top three with a charging Sheppard stalking the lead trio.

East Greenbush, N.Y.’s Hackel appeared to find speed around the halfway mark, suddenly applying more pressure to leader Smith than any other point of the first 15 laps.

Hackel’s attempts to pry his way underneath Smith only slowed the top two, bringing Sheppard to their bumpers after dispatching Warner for third.

With Smith and Hackel both using the bottom groove, the top side of the progressively banked half-mile was wide open for ‘Super’ Matt’s use. Smith put up a valiant effort, holding off Sheppard for a couple of laps, but Sheppard was once again too strong.

Sheppard cruised for the remaining 13 laps to his third consecutive victory, each one more impressive than the last.

Bachetti found the outside groove in the late stages, racing to a runner-up finish, his best of the new season at Utica-Rome. Smith rounded out the podium with Hackel finishing fourth and Warner rounding out the top five.

Masonville, N.Y.’s Shaun Walker had another strong run, coming home with a sixth-place run in his No. 21 car. Covington Township, Pa., rising star Alex Yankowski brought his family-owned No. 84y home with a seventh-place finish and Middlesex, N.Y.’s Alan Johnson grabbed eighth in the Mark Spoor-owned No. 14j. Genoa, N.Y.’s Pat Ward claimed ninth in the Beyea Custom Headers No. 42p and Jessica Friesen, of Sprakers, N.Y., rounded out the top-10.

Danny Varin was victorious in the return of the Lucas Oil Empire Super Sprints (ESS), capitalizing on a late race restart to take the win. The Fonda, N.Y., resident raced from his 10th starting position and appeared content to finish third for a long stretch of the race.

Cicero, N.Y.’s Paulie Colagiovanni was leading the field through lap traffic on lap 21 when second- running Kelly Hebing spun out, shuffling the deck, and moving Varin into the runner-up spot.

The lap-21 restart saw Colagiovanni get a great jump on Varin, pulling away by more than five car-lengths as the field went down the back stretch. One more caution would prove to be the difference, after Joe Trenca spun off the third turn embankment.

Varin got a better restart and kept pace with leader Colagiovanni before making his move in the first turn.

“I just didn’t lift going into one, I wasn’t sure if it would stick, but I had to try it,” proclaimed Varin in Victory Lane of his race winning move. Varin’s slide job gave him the lead for good, as the remaining three laps fired off caution-free.

Colagiovanni held on for second, and ‘Racin’ Jason Barney rounded out the podium finishers.

After appearing to be the fastest car on the track in the early going, South Onondaga, N.Y.’s Shawn Donath settled for fourth with St. Mathieu del Beloeil, Quebec’s Jordan Poirier rounding out the top-five.

After finishing in the runner-up spot in each of the first two weeks, Janczuk raced from 12th to win by more than three-and-a-half seconds for his first Utica-Rome win of the season.

Johnstown, N.Y.’s Brian Calabrese attempted to keep pace with Janczuk but found himself chasing in the runner-up position. After qualifying through the consolation, South New Berlin, N.Y.’s Payton Talbot followed up his back-to-back wins with a third-place finish from the 21st starting position. Oneida, N.Y.’s Dave Moyer came home in fourth and Mexico, N.Y.’s Addison Bowman rounded out the top five.

Not to be outdone, Grand Gorge, N.Y.’s Beau Ballard claimed his third consecutive victory to open the season in the Next Generation Graphix Pro Stocks feature.

After battling with Fort Johnson, N.Y.’s Josh Coonradt for seven laps, Ballard took advantage of a Coonradt mistake on the cushion to take the lead on lap 17.

After several chances to take the lead were nixed by cautions, the lap-17 move stuck for Ballard, giving a third win of ‘22 and his fourth consecutive dating back to last September. Coonradt held on to a runner-up finish with Jay Corbin finishing third. Jason Morrison and Bret Belden rounded out the top five.

After coming close on several occasions, Matt Backus was finally able to hang on for his first career Fastline Performance Limited Sportsman victory. Backus started on the outside of the front row and led all 15 laps to claim the win.

Zach Welch claimed his best career finish, grabbing the runner-up spot and Seth Martin continued his strong start to the season with a third-place finish.

Matt Bukovan returned to Victory Lane in the Fonda Fair Four Cylinder division for the first time since July of last year. Bukovan led all 12 laps for his first win in nearly a year. Jacob Kimball was the Single Cam winner of the event.

Racing resumes Friday, May 20 at Utica-Rome Speedway. All divisions will be in action and the Worthington Industries Crate 602 Sportsman race for a $1,500 top prize.

The Senior Services Inc. All-Star Slingshots and D&S Landscaping Junior Slingshots also join the program. Gates will open at 5 p.m. and racing is set to begin at 7:30 p.m.

Did Not Start: Randy Cosselman.

Did Not Start: Cian DiMezza.