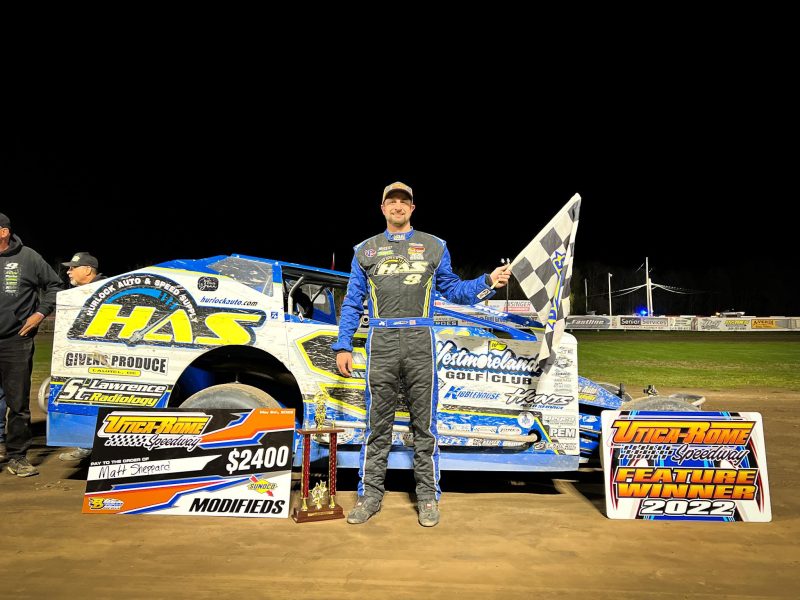 “This place has been good to me through the years, and I’m just glad to be back here (in Victory Lane) again this week,” said an elated Sheppard following his second consecutive win to open the 2022 season.

Decker used the outside of the front row to quickly jump out to the lead with Masonville, N.Y.’s Shaun Walker following Decker from the fourth spot to second.

Sprakers, N.Y.’s Jessica Friesen quickly worked her way by Nick Heywood to climb into a podium position in the early going, while Decker pulled away from the rest of the field.

Sheppard’s charge was a slow to one start, as the driver of the Hurlock Auto & Speed Supply No. 9S was stuck behind multiple battles for position, searching for racing room to move forward.

The first caution of the race flew on lap 10, as Claude Hutchings Jr. came to a stop at the outside of the fourth turn, restacking the field for the only restart of the night.

The yellow was crucial for Sheppard, not only bringing him closer to the front of the field, but giving him an outside restarting position two rows behind the leader Decker.

Sheppard quickly went to work, getting by both Pat Ward and Alan Johnson on the restart and into the fourth position with 19 laps remaining.

Right in front of Sheppard, Jessica Friesen was taking advantage of the restart as well, driving underneath Walker for the runner-up spot. Sheppard followed Friesen two short laps later, taking third away from Walker and setting his sights on the top two.

Sheppard’s assault continued, driving around Friesen at the halfway mark for second. Decker, who was working the outside, would prove to be Sheppard’s toughest challenge.

After multiple laps trying to work underneath Decker for the lead, Sheppard got a good run out of the fourth turn and slid in front of Decker to take the top spot away.

Working lapped traffic for the last eight laps proved to be no problem for Sheppard, as his lead continued to grow in the waning laps. When the checkered flag flew, Sheppard had opened an advantage of over five seconds back to runner-up Billy Decker.

“With the stout field here tonight, I didn’t know if we’d be able to get it done tonight from 11th, but we got rolling and picked off a few cars. We got a timely caution and after that the longer the race went it seemed like the other cars were slowing down and it didn’t feel like we were slowing at all,” explained Sheppard of his charge from the sixth row to the Sunoco Modified victory.

Decker held on for second in the Jeremy Smith Racing No. 91 and Jessica Friesen rounded out the podium in her One Zee Tees No. 1Z machine. Gloversville, N.Y.’s Rocky Warner made a late-race charge to get fourth in the Jason Simmons Racing No. 98 and Genoa, N.Y.’s Pat Ward rounded out the top-five.

After several yellows and one red flag in the early going, the stop-and-start feature saw Talbot and Oneida, N.Y.’s Matt Janczuk occupying the top two spots. Janczuk appeared to be the class of the field before Talbot changed lanes to the top groove and began closing in on Janczuk.

Grand Gorge, N.Y.’s Beau Ballard joined Sheppard and Talbot as back-to-back winners to open the 2022 campaign. This time around, Ballard did it in dramatic fashion. After leading all 20 laps last week, Ballard only paced the field to the checkered flags this time around in the $1,000-to-win Next Generation GraphiX Pro Stock event.

A late charge brought Ballard closer to Dan Slosek and Bret Belden, who were both dueling for the top spot. Ultimately, Ballard used the outside groove down the backstretch on the final lap to grab the win from Bridgewater, N.Y.’s  Slosek. Belden, Jay Corbin and Josh Coonradt rounded out the top five.

After coming up just short of his first win last week, Hamilton, N.Y.’s Alex Hughes raced by Matt Backus in the late stages to grab the win in the 15-lap Fastline Performance Limited Sportsman event. Backus held on for the runner-up spot and Eric Jensen rounded out the top three.

Corey Valade avenged last week’s runner-up with his first win of the 2022 season. Valade started on the pole and led every lap of the 12-lap Fonda Fair Four Cylinder feature. Jacob Kimball won the Single Cam portion of the event.

The Slingshots had their season opener on the inner oval. Chris Darrow bested his teammate and defending champion Brett Putnam for the season opener for the Senior Services Inc. All-Star Slingshots in the 20-lap main. Blake Banek won the caution-filled D&S Landscaping Junior Slingshots for the 15-lap season-opening victory.

Racing resumes Friday, May 13 at Utica-Rome Speedway. All divisions will be in action and the Lucas Oil Empire Sprint Series joins the program for their return to the ‘Home of Heroes.’