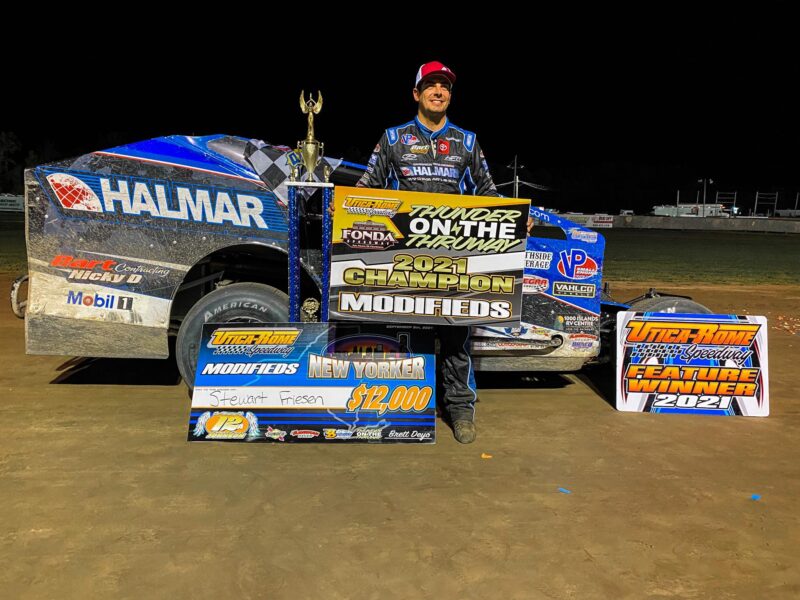 The win for Friesen made him a perfect five-for-five in Fuccillo Autoplex of Nelliston Thunder on the Thruway races, giving him the $4,000 championship to go with his $12,000 victory.

Friesen started from the 10th position, working into the lead just past the halfway point and never relinquishing it from there.

“We set up for the end of the race, it was a typical New Yorker. Slick top-to-bottom and you could race all over,” explained Stewart of his second-half dominance in the 100-lap main.

Friesen’s New Yorker triumph was the third of his career and his first since 2017, outdueling Duanesburg, N.Y.’s Ronnie Johnson and Brisbane, Australia’s Peter Britten.

Britten started on the pole with Sheffield, Mass., star Andy Bachetti alongside. Bachetti darted off the outside line, taking the lead and setting the pace for much of the early going.

The first 18 laps went caution-free, and Friesen and Savannah, N.Y.’s Matt Sheppard had both worked their way into the top five. The next 20 laps saw multiple cautions, continually restacking the field.

One of the yellows was a result of 2021 Sunoco Modified champion Matt Sheppard coming to a stop in turn three, sending him to the rear. Sheppard went pit side to make adjustments to his racecar, but the No. 9s machine was only able to rebound to a 12th-place finish.

Friesen continuously traded the third position back and forth with Britten, while Bachetti stayed one step ahead of Ronnie Johnson on each restart.

When the field went back to a long green flag run, Friesen got exactly what he needed. As the leaders worked in lap traffic, Friesen negotiated the top and bottom better than any of his competitors.

Right at the halfway point, Friesen seized a moment when Johnson got trapped behind two lap cars, sliding around ‘RJ’ and setting his sights on Bachetti out front.

Just five circuits later, Friesen worked the bottom side to perfection, slipping underneath Bachetti while he also struggled to get by slower traffic.

“We had a great racecar; it was very nimble, and I could go anywhere. My guys worked so hard, and they deserve this,” Friesen proclaimed in Victory Lane.

The race remained green until lap 81, when Bachetti, who was running third, saw his night go by the wayside, getting over the turns one and two banking and spinning out.

Peter Britten went from fourth to second on the restart, getting around Ronnie Johnson and Ransomville, N.Y.’s Erick Rudolph, who’d driven from 17th into the top five.

One more yellow for a Bachetti spin with seven laps to go gave Peter Britten a chance on the outside to roll the top and steal the lead away from Friesen, however his effort came up short.

Friesen remained flawless, racing to a four-second victory in his Halmar International No. 44. The win for Friesen was his fifth of the season at Utica-Rome, coming three days after he got his fourth win on Friday night.

Ronnie Johnson claimed second in the No. 2RJ and Peter Britten claimed a podium finish in the Ryder Racing No. 21A.

Erick Rudolph wound up fourth in the Revive Spine Center No. 25 and Unadilla, N.Y.’s Billy Decker rounded out the top five in the Jeremy Smith Racing No. 91.

Sixth was Fonda, N.Y.’s Danny Varin in the Magsarus No. 93 and Middlesex, N.Y.’s Alan Johnson grabbed the seventh spot in the Mark Spoor-owned No. 14j. Cropseyville, N.Y.’s Matt DeLorenzo finished eighth in the BBL Companies no. 3D.

Sprakers, N.Y.’s Jessica Friesen claimed ninth in the One Zee Tees No. 1Z and Johnstown, N.Y.’s Rocky Warner rounded out the top-10 in the Jason Simmons owned No. 98.

Thirty-five Sunoco Modifieds signed in to take part in the New Yorker 100.

Colagiovanni’s closest competitor appeared to be Phoenix, N.Y.’s Larry Wight who had raced to second in just five laps and was drawing closer to the leader.

Unfortunately for Wight, one lap after getting to second, he slipped over the banking in turns three and four and collided with the outside wall trying to recover, sending his car up and over and ending his night prematurely.

Ontario, N.Y.’s Chuck Hebing claimed the runner-up spot and Danny Varin, who was pulling double duty, rounded out the podium finishers. The battle between and Hebing and Varin went on for almost the entirety of the remaining 19 laps, as the pair traded the runner-up position several times.

Oneida, N.Y.’s Matt Janczuk grabbed his ninth Worthington Industries Crate 602 Sportsman feature event. The win was worth $2,000 as Janczuk started on the pole and went relatively unchallenged for the win.

The win was Janczuk’s triumph of the season at the ‘Home of Heroes,’ and his third Thunder on the Thruway win, all coming at Utica-Rome.

Gloversville, N.Y.’s Chad Edwards was the runner-up, good enough to get him the Thunder on the Thruway championship for the Crate 602 Sportsman. Johnstown, N.Y.’s Brian Calabrese rounded out the podium finishers.

Grand Gorge, N.Y.’s Beau Ballard came from the seventh starting position to get his third win of the season at Utica-Rome Speedway in 2021, and his first since June 11 in the Next Generation Graphix Pro Stocks division.

The 2021 Next Generation Graphix Pro Stock used the outside on a mid-race restart to work around nine-time winner Nick Stone to get his third win of the season.

Stone, of Schenectady, N.Y., held on for a runner-up finish which was good enough for him to claim the Thunder on the Thruway Series championship. Gloversville, N.Y.’s Luke Horning rounded out the top three after recovering from a spin while battling for the lead in the early stages of the race.

Racing returns Tuesday, October 5 at Utica-Rome Speedway as the season concludes at the ‘Home of Heroes’ with the ‘Modern Day Outlaw 50.’

The Sunoco Modifieds will go 50-laps for $10,000-to-win with sail panels to headline the event. The Patriot 360 Sprint Cars return with the rebirth of the ‘Cole Cup,’ in a $5,000-to-win race for the Sprint Cars. The Worthington Industries Crate 602 Sportsman round out the program with a $1,500-to-win event.