One for the Ages: It’s Friesen Over Sheppard on Championship Night at Utica-Rome 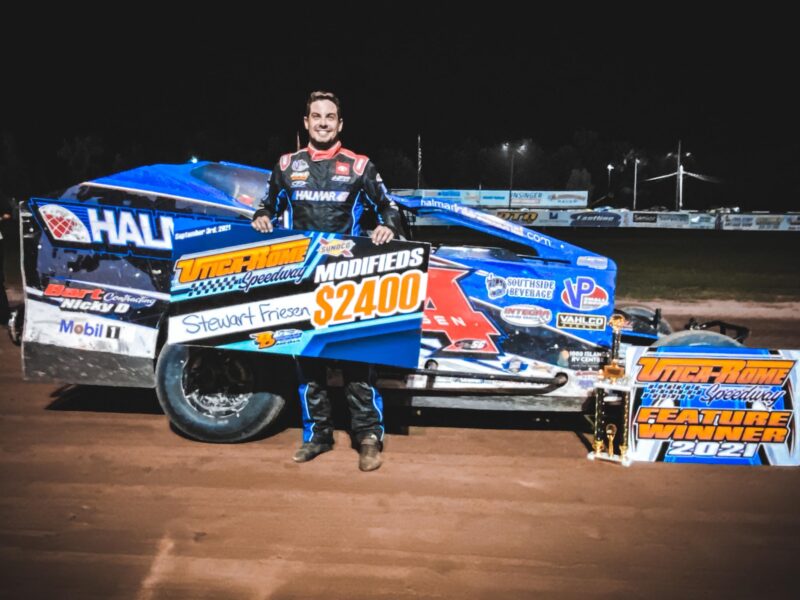 VERNON, NY – One for the ages.

“Great racing man, this place is so racy, anytime you beat the ‘9s’ right now it’s a big night,” an excited Friesen proclaimed in Victory Lane.

Friesen, who has missed Friday nights on occasion due to his NASCAR Truck Series commitments, grabbed his fourth win of the season as Algonkin Motel LLC and Slade Automotive presented Championship Night at the ‘Home of Heroes.’

While Friesen won the battle, Sheppard won the war, claiming the 2021 Sunoco Modified track championship, his first since 2017.

Friesen’s quest for win No. 4 on the season would go from the 12th starting position, while Sheppard started in the row in front of him, going from 10th.

Davis would jump off the outside groove and lead in the early going, while Fultonville, N.Y.’s JaMike Sowle was marching forward.

The driver of the Carol and Alton Palmer owned No. 76 worked to the runner-up position and was reeling in the leader Davis.

As the two duked it out for the lead, ‘Super’ Matt got rolling on the bottom side of the speedway. Sheppard would work underneath Darren Smith and Marshall Hurd, moving himself to third and closing in on the two leaders.

On the eighth circuit around the Route 5 oval, Sowle threw a slide job, taking the lead away from Davis, dropping him back into the clutches of Sheppard’s No. 9s machine.

Sheppard followed Sowle by Davis, while Stewart Friesen suddenly came to life, splitting the middle of Binghamton, N.Y.’s Darren Smith and Marshall Hurd to get to fourth.

Sowle proved to be tough up front, keeping Sheppard at bay for multiple laps, allowing Friesen to close on the two leaders as lap traffic became a factor.

Sheppard was finally able to make the move for the lead, driving underneath JaMike Sowle for the lead as the field came to the halfway sign. Friesen wasn’t far behind, sliding by Sowle just two laps later, setting up another battle between Sheppard and Friesen.

Chaotic lap traffic continued to throw curveballs at the leaders, with drivers racing side-by-side, and multiple drivers going over the banking in front of the top two.

With two laps to go, Friesen was finally able to make his racecar stick on the bottom side, something he struggled to do for much of the 30-lap affair.

“I was really just trying to throw a slide job at him, and it just stuck, and I was able to clear him off of two,” Friesen explained of his race winning move.

The Sprakers, N.Y., native only needed to make it work once, driving underneath of Sheppard and coasting to his fourth win of the season.

“It’s been a pleasure to race here this season. The track has been awesome and winning another Utica-Rome championship means a lot here in the new era of the racetrack,” Sheppard proclaimed of his championship season.

Sheffield, Mass., driver Andy Bachetti put on a late race charge to grab third and secure a runner-up in the Sunoco Modified points chase. Sowle came home fourth, his best finish of the season at Utica-Rome. Vernon, N.Y.’s Willy Decker rounded out the top-five in his JSD Express No. 1x.

Darren Smith would bring the Jeremy Smith Racing no. 12 home sixth and Ricky Davis drove his family-owned No. 59 to a seventh-place run. Oneida, N.Y.’s Matt Janczuk debuted in the Modifieds in 2021 aboard the Caprara-backed No. 33x and grabbed eighth. Middlesex, N.Y.’s Alan Johnson claimed ninth in the Friendly Ford No. 14J and Marshall Hurd rounded out the top-10 in his Midstate Recycling No. 58m.

Vernon, N.Y.’s Willy Decker Jr. won his second 25-lap Worthington Industries Crate 602 Sportsman feature of the season, much to the delight of the hometown crowd.

Decker Jr. outgunned Genoa, N.Y.’s Will Shields for the final 10 laps to claim his second win of the season.

Janczuk’s fifth-place finish was good enough for him to claim his eighth track championship at Utica-Rome Speedway.

Jay Corbin picked up his first win of the season Utica-Rome Speedway, beating West Milton, N.Y.’s Josh Coonradt to the front and holding him off for the win.

Coonradt would grab the second position and Schenectady, N.Y.’s Nick Stone would round out the podium finishers.

Alex Hughes, who joined Utica-Rome on Friday nights in the last month of the season, capped off the season with his first Fastline Performance Limited Sportsman 15-lap triumph. Hughes would hold off Eric Jensen for the win.

Baldwinsville, N.Y.’s David Hackett Jr. and Rotterdam, N.Y.’s Clayton DuMond entered the final points night tied for the championship. At the end of the 15-lap feature, Hackett beat DuMond by one position, claiming third place and the championship.

Justin Pope finished the season as the Dual Cam and overall champion and Wayne Russell Jr. finishes as the Single Cam champion for 2021.

Did Not Start: Ted Starr.