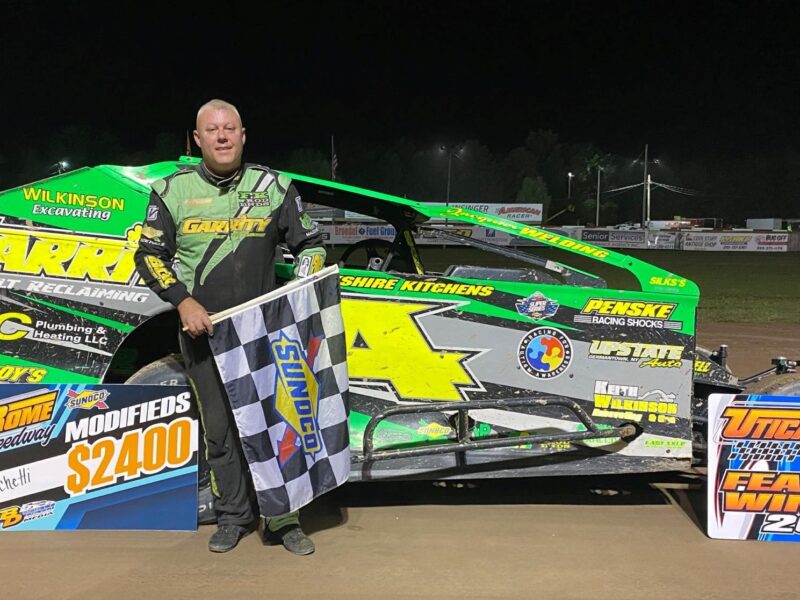 Entering Friday night, the Sunoco Modifieds had run 11 feature events in 2021 at Utica-Rome Speedway. Andy Bachetti finished outside the top-five just twice in the 11 events, but never found his way to Victory Lane.

Last night, that all changed as the pieces fell into place for the Sheffield, Mass., star to put his Garrity Asphalt Reclamation No. 4 car in Victory Lane at the ‘Home of Heroes’ for the first time since 2007.

“We’ve been on a roll here and we knew we were gonna get one, just wish Matt (Sheppard) was still in it,” Bachetti explained following his first win of the season.

After last week’s runner-up, Bachetti would start his quest for win number one from the 10th starting position with Stanley, N.Y.’s Zach Payne and Vernon, N.Y.’s Willy Decker occupying the front row.

The initial start took out some heavy hitters, as Ricky Davis, who started third, got turned around in the middle of turns three and four, collecting Alan Johnson and Rocky Warner, ending both of their nights before a lap was completed.

On the second try, Willy Decker jumped off the outside of the front row, taking the lead for much of the early going.

Meanwhile, Savannah, N.Y.’s Matt Sheppard was up to his usual tricks, taking advantage of the early yellow and driving to second in just three laps and brought invader Tim Fuller along with him, who got to third shortly thereafter.

Bachetti, meanwhile, was tailing Sprakers, N.Y.’s Jessica Friesen as they both worked their way into the top five by lap 10.

Up front, Sheppard had caught Willy Decker, searching for a way to get by as the two battled in lap traffic.

On lap 14, Decker could not find a way around Ron Holmes, and Sheppard quickly extracted both, racing to the front and appearing to set sail.

As Sheppard drove away up front, Bachetti had gotten by Friesen for fourth, and quickly reeled in Fuller for third.

“All season it feels like we’ve gotten better as the races have gone on and that was true again tonight,” Bachetti explained of his racecar appearing to surge in the latter half of the race.

On lap 18, the race changed as Sheppard made slight contact with a lap car, cutting his right-rear tire and forcing him pit side.

When the field went back to green, Decker had inherited the lead back, now with Fuller alongside.

A chaotic restart saw Fuller get shuffled back to sixth, while Bachetti and Friesen battled for the runner-up spot as Decker tried to pull away.

Bachetti was not to be denied, as he slid by Friesen quickly after the restart and locked eyes on Decker.

Lap 23 was the lap for the ‘Wild Child,’ as Bachetti drove underneath Decker and drove away with his fourth career win at Utica-Rome Speedway.

Decker would hold on to a runner-up finish and Jessica Friesen rounded out the podium finishers.

Altamont, N.Y.’s Brian Gleason drove from 14th to fourth in his BBL Companies No. 3G and Edwards, N.Y.’s Fuller rounded out the top five in the St. Lawrence Radiology No. 19.

Oneida, N.Y.’s Matt Janczuk was once again victorious with the Worthington Industries Crate 602 Sportsman, his eighth win of the season.

Janczuk split the middle of Allan Hodge and Will Shields just before halfway to grab the lead and never looked back. The win also expanded Janczuk’s lead in the Worthington Industries Crate 602 Sportsman division with just two races left.

The CRSA Sprint Cars were in town for the second and final time this season, and it was Spencer, N.Y.’s Kyle Pierce who grabbed the win.

Trout Creek, N.Y.’s Dana Wagner started on the pole and led the first six laps, before blowing a right-rear tire and colliding with the front stretch wall, ending his night.

Pierce was there to take advantage, leading from there on out to get his first ever Utica-Rome Speedway win. Romulus, N.Y.’s Ray Preston was the runner-up and Altamont, N.Y.’s Jeff Trombley finished third after starting in the 12th position.

Waterloo, N.Y.’s Bobby Parrow claimed the fourth position and McDonough, N.Y.’s Dalton Herrick came from 14th to round out the top five.

Schenectady, N.Y.’s Nick Stone continued his recent hot streak, getting his third consecutive win with the Next Generation Graphix Pro Stocks and join Matt Janczuk as an eight-time winner this season.

Ulysses, Pa.’s Tyler Lawrence grabbed the runner-up spot in his first appearance at Utica-Rome in 2021 and Cobleskill, N.Y.’s Lance Hill rounded out the top three.

Justin Pope (DOHC) bested the largest Cool Stuff Antiques Four Cylinder field of the season (16 cars), for his eighth win of the season and expanding his point lead. T.J. Marlitt was the Single Cam winner of the 12-lap feature.

The Senior Services Inc. All-Star Slingshots and D&S Landscaping will also be in action on the inner-oval for their championship night.

Did Not Start: Brad Alger.

Did Not Start: Len St. Andrews.