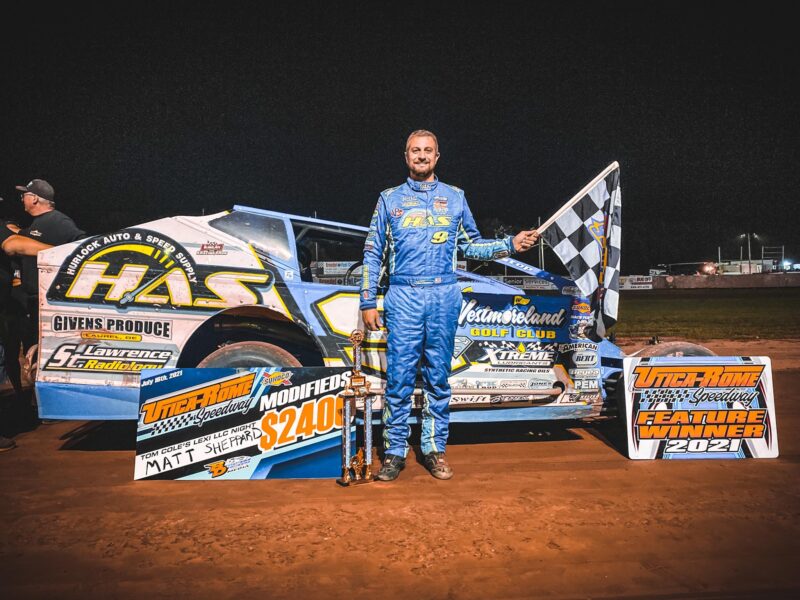 The beat goes on for Savannah, N.Y.’s Matt Sheppard, as he grabbed his fourth consecutive Sunoco Modified feature event on Friday night after an epic duel with Sprakers, N.Y.’s Stewart Friesen and Unadilla, N.Y.’s Billy Decker in the 30-lap event.

In the end, Sheppard continues to be the man to beat at the ‘Home of Heroes’ earning the $2,400 top prize.

The green flag threw with Fultonville, N.Y.’s JaMike Sowle and Glenville, N.Y.’s Brian Gleason on the front row, while Sheppard began his quest from the 11th starting spot.

Gleason and Sowle battled for the lead allowing Whitney Point, N.Y.’s Marshall Hurd to sneak up the inside and taking the lead on lap two.

Sheppard, meanwhile, wasted no time, climbing to second in just three laps. ‘Super Matt’ reeled in Hurd and took the lead away on lap six.

From there, attention turned to Friesen, who was battling with Middlesex, N.Y.’s Alan Johnson and Brian Gleason for the third spot.

Friesen worked to third and like Sheppard, began reeling in Marshall Hurd before the first yellow of the race came on lap 11. Two laps later, another caution occurred as Sheffield, Mass., native Andy Bachetti slowed with a flat tire.

Friesen pulled up alongside Sheppard for the lap-13 restart, setting up what appeared to be a 17-lap war between the top two.

On the restart, Friesen snatched the lead away using the bottom lane and appeared to be setting sail before another yellow restacked the field five laps later.

Friesen chose the bottom lane on the restart, and Sheppard went to another gear in the outside lane. Sheppard rocketed around Friesen, taking the lead back from his counterpart.

Another restart appeared to give Friesen another opportunity, but it was ultimately Friesen’s last lap, as a mechanical failure caused the No. 44 to slow before pulling to the infield on the back straightaway.

With Friesen out of the picture, it was the invader Billy Decker’s turn to pressure Sheppard. Decker rode in the third position, watching Friesen and Sheppard battled for the lead. When Decker was handed the runner-up spot, he turned up the wick on Sheppard.

The two traded the lead five times in a five-lap green flag run, before another yellow came out on lap 23. Sheppard led the last lap before the caution flag flew, which appeared to be the deciding factor in the race.

On the ensuing restart, Sheppard used his lane choice to switch to the bottom and drive away from Decker and the rest of the field. One more late race restart gave the field one more chance, but ‘Super Matt’ was in command.

Decker took home the runner-up spot in the Jeremy Smith Racing No. 91 and Johnstown, N.Y.’s Rocky Warner battled back to third in his Jake Spraker-owned No. 1J.

Alan Johnson held on for fourth in the Friendly Ford No. 14j and Gleason rounded out the top-five in the BBL Companies no. 3G.

East Greenbush, N.Y.’s David Schilling drove the family-owned No. 20 to a sixth place run with Rusty Smith grabbing seventh in his first appearance of 2021.

Oneida, N.Y.’s Matt Janczuk returned to Victory Lane in the Worthington Industries Crate 602 Sportsman division. After missing a week and a disqualification for a rev box infraction last week, Janczuk returned with a vengeance on Friday night in the 25-lap main.

Janczuk slowly crept into the top five on lap 10, before taking advantage of some mid-race restarts to pick his way through the top five and take the lead. Janczuk would ultimately pick up his fourth win of the season by a straightaway over the rest of the field.

Schenectady, N.Y.’s Nick Stone picked up his fifth win of the season and third consecutive Next Generation Pro Stock 20-lap triumph, racing to the front in the first five laps and never looking back.

With the win, Stone pulled even with Grand Gorge, N.Y.’s Beau Ballard for the point lead. Ballard grabbed the runner-up spot and Johnstown, N.Y., native Jason Morrison rounded out the podium.

Rotterdam, N.Y.’s Clayton DuMond continued his stranglehold on the Fastline Performance Limited Sportsman division, grabbing his fourth win this season in the 15-lap main. DuMond drove to second and took the lead after David Hacket Jr. slipped off the banking in turns three and four. DuMond never relinquished the lead after that.

Did Not Start: Jeff Rockafeller

Did Not Start: Rudy King Jr.