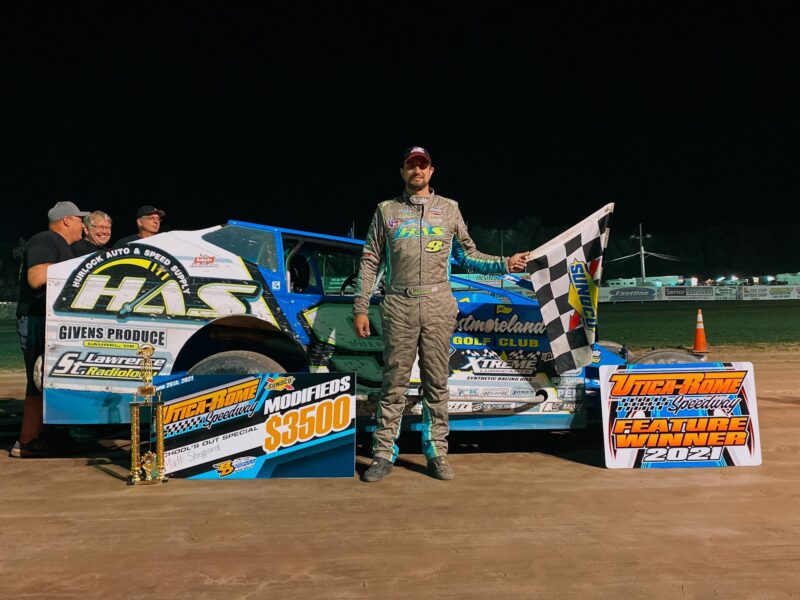 A massive crowd took in the action on a beautiful night for racing in Vernon.

For Sheppard, the win was the 44th of his illustrious career at Utica-Rome and his second in as many events after three second-place finishes to open the season.

The win also came on a night when Utica-Rome Speedway management boosted the winners’ share. Sheppard pocketed a cool $3,500.

Sean Beardsley and Tim Mayne made up the front row, while Sheppard’s charge started from the 10th position.

On the opening lap, Whitney Point, N.Y.’s Marshall Hurd drove from his fourth starting position, around the top-three and into the lead. Middlesex, N.Y.’s Alan Johnson – who started sixth – followed Hurd and was second quickly behind Hurd.

Johnson wasted no time working around Hurd, racing to the lead on lap two. Johnson began to march away.

Sheffield, Mass., native Andy Bachetti and Sheppard were next to race with Hurd, trying to crack the top-three. The trio was three-wide at one point, with Bachetti taking second on lap three, with Sheppard racing to third one circuit later.

Sprakers, N.Y.’s Stewart Friesen then began to make his presence known, climbing to fourth before reeling the battle between Sheppard and Bachetti for second, while Johnson was driving away up front.

On lap nine, Bachetti slipped off the banking in turns three and four, allowing Sheppard and Friesen to drive underneath of him.

With a clear track between himself and Johnson, Sheppard quickly reeled in ‘AJ Slideways’ decimating the once straightaway advantage. Sheppard took over the lead as the field completed their 14th trip around the speedway.

Four laps later, Friesen drove around Johnson as well, but Sheppard’s lead had grown to half a straightaway on the half-mile oval.

In the remaining 12 circuits, Friesen continued to slowly catch Sheppard, as they worked in and out traffic. However, Friesen’s late race bid came up short.

Friesen gave one last-ditch effort, diving underneath of Sheppard in the final two turns, but Sheppard’s high side momentum held off Friesen and grabbed the 900th Modified event at the ‘Home of Heroes.’

Alan Johnson maintained third in his Friendly Ford No. 14j with Bachetti bringing the Garrity Asphalt Reclamation No. 4 home fourth. Johnstown, N.Y.’s Rocky Warner raced from last after missing his heat race to a fifth-place finish in the Jason Simmons Racing No. 98.

Nick Stone of Schenectady, N.Y., picked up his third Next Generation Graphix Pro Stocks feature win of the season. Stone quickly raced from his sixth starting spot and into the lead in just three laps. From there, Stone was never challenged, winning by nearly half the track in the 20-lap main.

Point leader Beau Ballard raced to second from his eighth starting position and Jim Normoyle rounded out the top five.

Alysha Bay picked up her first career Utica-Rome Speedway win, and the fourth of CRSA Sprint Car career. Bay started on the pole and led every lap of the 20-lap main, picking up the first of two appearances for the series at the Route 5 oval.

Stephentown, N.Y.’s Matt Tanner reeled Bay in and with a late-race yellow, had an opportunity to take the lead on the outside, but ran out of laps, coming home second with Dana Wagner rounding out the top-three.

Justin Pope continued his winning ways, grabbing his fourth Cool Stuff Antiques Four Cylinder 12-lap win in as many tries. Wayne Russell Jr. was the Single Cam winner, his third of the season.

Racing resumes Friday, July 2, for the ‘Independence Weekend Kickoff’ on Parks Companies Night. The Sunoco Modifieds will race for $3,500-to-win to headline the event. Joining the modifieds will be the Worthington Industries Crate 602 Sportsman, Next Generation Graphix Pro Stocks, Fastline Performance Limited Sportsman, and the Cool Stuff Antiques Four Cylinders.

The Senior Services Insurance All-Star Slingshots and the D&S Landscaping Junior Slingshots will be on hand as well on the inner oval.

Additionally, there will be a Fireworks Extravaganza at dusk.

Did Not Start: JaMike Sowle