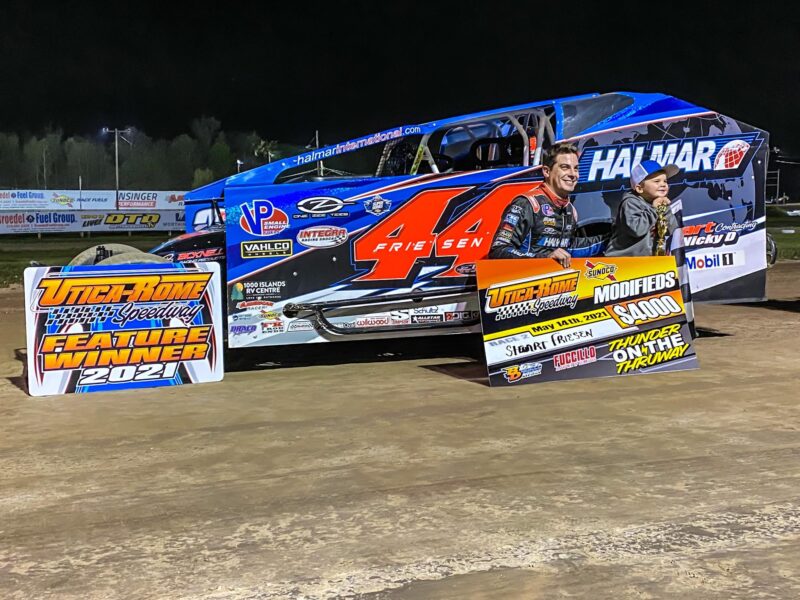 In the return to racing at Utica-Rome Speedway, Sprakers, N.Y.’s Stewart Friesen dominated the field, lapping everybody but the second-place car in a non-stop, 35-lap Sunoco Modified feature.

Friesen captured his second consecutive Fuccillo Autoplex of Nelliston Thunder on the Thruway Series win, and another $4,000 to go with it. The win also set the mark as Friesen’s 13th different winning season at Utica-Rome, the most in the history of the Speedway.

Following the redraw, Friesen started on the pole alongside Gloversville, N.Y.’s Josh Hohenforst. Stewart quickly jumped to the lead, while his wife, Jessica Friesen, rolled the outside to go from fourth to second on the initial start.

The Friesens would occupy the top two spots, until Savannah, N.Y.’s Matt Sheppard slid underneath Jessica to take the runner up spot on lap-12. By the time Sheppard had reached the runner-up position, Friesen had already opened nearly a straightaway lead.

From there, Friesen and Sheppard set an unbelievable pace, that nobody else in the field could maintain.

“I knew the one car I wasn’t catching was Sheppard. I kept going as hard as I could because I knew he’d be there if I didn’t,” explained Friesen in Victory Lane.

As Friesen and Sheppard diced thru lap traffic, Jessica Friesen, Josh Hohenforst, Sheffield, Mass.’ Andy Bachetti, and Johnstown, N.Y.’s Rocky Warner battled at the back half of the top five.

While they continued to trade positions, Friesen was closing in, while maintaining his straightaway lead over Sheppard. By the end of the 35-lap main event, Friesen would put everybody except Sheppard a lap down.

Sheppard kept pace with Friesen, but never could catch the Halmar No. 44, settling for second in his Hurlock Auto & Speed No. 9s.

Andy Bachetti grabbed a podium finish with his Garrity Asphalt No. 4. Jessica Friesen came home fourth in the One Zee Tee’s No. 1z and Rocky Warner rounded out the top five in the Jason Simmons Racing No. JS98.

After quickly working to second in the opening two laps, Janczuk continued to work the topside of the racetrack. After working Johnstown, N.Y.’s Brian Calabrese over for multiple laps, Janczuk passed Calabrese for good on lap eight.

If there was an award for race of the night, the Next Generation Graphix Pro Stocks would win the award hands down.

After a thrilling battle for 13 of the 20 laps in the main event, Nick Stone up-ended Beau Ballard for his second consecutive Thunder on the Thruway win and the $1,000 payday.

Stone worked the top persistently, finally rolling around Ballard to take the lead before getting the two laps to go sign from starter Joe Kriss. Stone would hold off Ballard from there to take the victory.

Ballard held on for second with Ivan Joslin rounding out the podium. Andy Graves and Jim Normoyle rounded out the top-five in the season opener.

Clayton DuMond grabbed his first career Utica-Rome Speedway win, leading every lap of the Fastline Performance Limited Sportsman feature. He was chased to the line by David Hacket Jr., Jeremy Slosek, Matt Backus, and Pat Nolan, who were the top-five.

Racing returns to Utica-Rome Speedway next Friday night. All regular divisions will be in action, plus the Senior Services LLC Slingshots and D&S Landscaping Junior Slingshots will compete for the first time this season.

Did Not Start: Jeff Rockafeller

Did Not Start: Jason Morrison.

Did Not Start: Amber Jacobs.