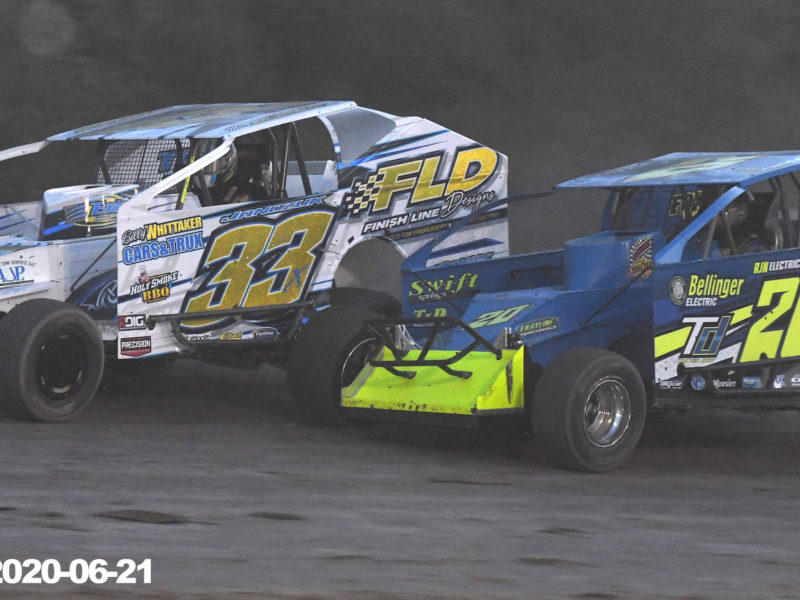 VERNON, NY – The DIRTcar Sportsman Central Region Series opener headlined the Sunday night show at Utica-Rome Speedway in a program presented by Rasmussen Rents.  Also on the card were the Dirt Track Digest DIRTcar 358-Modifieds, the Ted’s Body Shop Pro Stocks and the Bernie’s Extreme Performance Rookie Sportsman.  At the conclusion of the program, Matt Janczuk, Erick Rudolph, Josh Coonradt and A.J. Martino were all victorious in their respective divisions.

There is no denying that Janczuk, from Sherrill, N.Y., was a favorite going into tonight’s DIRTcar Sportsman Modified Series: Central Region kickoff at Utica-Rome Speedway. Janczuk has been a master on the Vernon, NY half-mile oval with the 2019 track champion to his credit.

The 32-car field was jammed with the premier DIRTcar Sportsman Modified drivers of the Northeast, all vying to make history as the winner of the first Series race of the 2020 season. Janczuk redrew the 8th starting position looking uphill at Kyle Inman, defending Series champion Kevin Root, Zach Sobotka, Chris Mackey, and more.

The 30-lap Feature was nearly non-stop with just a single caution slowing the action.

Janczuk used speed, multiple lines, and a little luck to work his way by the best in the business. The defending track champion reeled in leader Kyle Inman in the closing stages and on the final lap and in the final corner, Janczuk muscled his no. 33x machine ahead of Inman at the line.

Janczuk is on a serious hot streak. Look out Kyle Larson.

“We’ve won four in a row with tonight,” said Janczcuk. “Things have just been really good thanks to this Bicknell, DIG, and Fastline Performance.”

From the drop of the green flag, the racing was top to bottom on the half-mile autodrome.

“We were pretty good in three and four at the top and the bottom was good if you hit it in one and two. I was going in on the top of 1 and 2 and going across the track for the bottom to get off,” noted Janczuk. “It was kind of the old “Stewie Friesen move” they call it. I made it work. I don’t know how but we did.”

Janczuk now has a guaranteed starting position in the World Short Track Championship Invitational Feature at The Dirt Track at Charlotte.

After cleaning up the Sportsman race, Janczuk hopped in his DIRTcar 358 Modified and picked up a top five finish there as well in Hoosier Racing Tire Weekly Championship competition.

A late-race triumph for one driver can only mean heartbreak for another. Kyle Inman led most of the 30-lap Feature but unfortunately, he crossed the line second on the lap the records books count.

On the fateful final lap, Inman tried to fend off Janczuk and both cars came out of turn 4 wheel-to-wheel, clean and green. Janczuk had momentum on the outside which propelled him down the long Utica-Rome front stretch ahead of the no. 20x for the win.

“It was tough. We were racing really hard there at the beginning. I had to run lines that I really shouldn’t have run,” said Inman. “ I worked the tires a little too much going through the middle. I probably used up a little too much car early on. I’ll take a second place.”

It wasn’t all fun and games on Father’s Day for Inman. If anyone deserves a perseverance award for the event, it’s him.

“I had some tough luck getting here. We had a flat on the trailer so we were stuck on the side of the thruway for a little while. We had to go 30 MPH for the last 30 miles just to get here so that wasn’t fun. But I started 10th in the Heat Race and got up to third for the redraw,” said Inman of his travails getting to the track.

Third place finisher Chris Mackey showed a lot of speed and racecraft to capture his podium finish. He stayed in the top five, dicing in and out of lapped traffic with the leaders for 30 laps. Mackey was quickest in his Timed Hot Laps group and finished second in his Heat Race.

“We made some changes after the last two races out and it seemed to help tonight but we are still lacking a little bit. We started losing ground in lapped traffic. I knew Inman was right there. I got him on the restart and kept the lead for a while,” said Mackey.

Mackey had a close call with defending Series champion Kevin Root. While racing side-by-side Mackey pinched him down to the implement tires and Root had to jump on the brakes to prevent an unwanted wheelie or broken race car. No harm. No foul.

“When you are out there racing against these guys you gotta keep your foot in it when you can. But we always try to race clean and hard so I feel bad about that,” Mackey noted.

The Dirt Track Digest DIRTcar 358-Modifieds were on the schedule for the first time in 2020.  Much like 2019, it was the Erick Rudolph show.  Although he was pressured early by Pat Ward and 2019 Super DIRTcar Series champion Mat Williamson, they just didn’t have enough to stay with the Ransomville, N.Y., driver as he claimed a dominant win in the 30-lap affair.

Rudolph and Williamson led the field to green by virtue of their heat race wins.  Rudolph got the edge at the start beating Williamson down into the first turn.

Rudolph dealt with a handful of double-file restarts early, each time proving to be up to the task.  While he showed the way, Williamson and Ward swapped the second spot on numerous occasions.

With 10 laps remaining traffic became an issue for Rudolph as Williamson finally solidified his hold on second from Ward.  Rudolph was methodical as he picked his way through the slower cars.  Williamson made up ground but couldn’t get the job done.

Rudolph went on to win with Williamson and Ward completing the podium.  Dave Marcuccilli finished in the fourth spot while Janczuk backed up his Sportsman win with a fifth in the Modifieds.

Josh Coonradt returned to Utica-Rome Speedway Sunday night and wasted little time putting his name at the front of the field in the 20-lap Ted’s Body Shop DIRTcar Pro Stock feature.  Coonradt started in the eighth position.  By lap two he moved into second before making his move around Mike Kazlauskas on lap three for the lead.

The race was slowed by its only caution on lap 14 when multiple cars tangled in turn two.  The green came back out with Coonradt jumping away from the field a second time.  He led the final six laps for the win.  Jim Normoyle finished second followed by Jason Morrison, Jay Fitzgerald and Kazlauskas.

The Bernie’s Extreme Performance Parts Rookie Sportsman capped off the night with a 15-lap main-event.  As he’s been able to do all year, A.J. Martino dominated the affair.  Martino led the entire way over to earn the win.  Paul DeRuyter and Andrew Stadelmann completed the podium.

The Utica-Rome Speedway will not have oval track racing next Sunday night as the motocross track is slated for it’s first event of the season on Saturday and Sunday afternoon.  Stay tuned to www.uticaromespeedway.com for more details about our next planned oval track event.