Janzcuk, Jeseo and Bonoffski Kick off the Point Season at Utica-Rome with Sunday Night Wins 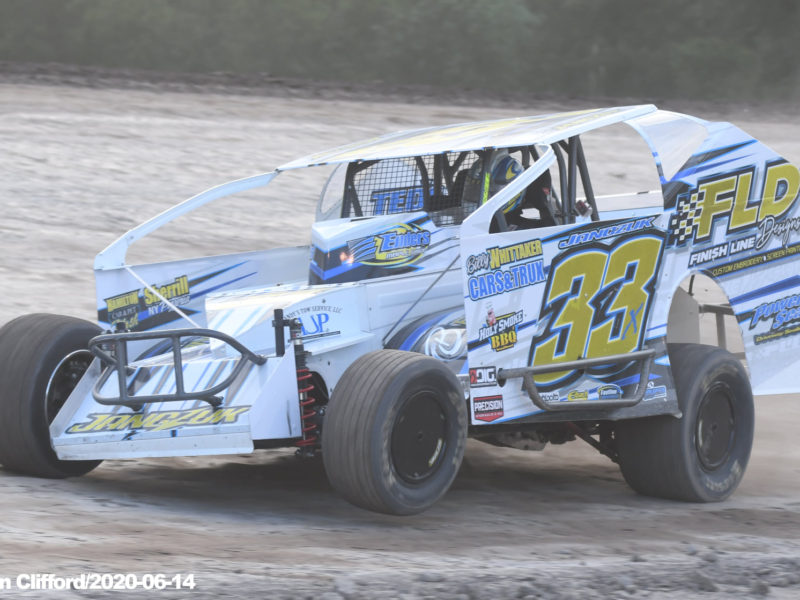 A large field of 33 sportsman was slimmed down to 28 starters for the 20 lap feature event for the sportsman with the field filled with some of the top stars in Central, NY.  Janczuk is no stranger to the Utica-Rome victory lane and with points on the line he wanted to make a sure he kicked off the new season on the right foot.

By virtue of winning the first heat, Janczuk earned the pole for the feature event where he took control right at the drop of Scott Hixson’s green flag.  A little early race, yellow flag fever, Janczuk getting the jump on each restart.  First, he had Chris Mackey and then Kevin Root alongside him but each time the green light shined it was the familiar #33 pulling ahead to a slight lead.

The second half of the event found the field settling in with Janczuk maintaining a good size lead over his archrival Root. At the end of the 20 lap event, it was Janczuk taking another win at the Vernon, NY oval.  Root came hime in second over Kyle Inman, Mackey and Alan Fink.

Averill Park, NY’s Chad Jeseo is regarded as one of the best to wheel Pro Stocks over the years.  After a brief stint with modifieds, he is back in the cars he loves.  Jeseo took the lead from Jim Normoyle on the first lap and held off the field on the 20 lapper that was slowed by only one caution.

With Jeseo just hoping for no mechanical failures on not making a mistake, all eyes were on the wild three-way battle for the runner-up slot.  Normoyle, Travis Welch and AJ Walters were all under a blanket lap after lap.  Coming down the front stretch on the final lap, it was Welch just edging Normoyle and Walters at the stripe.  Shane Henderson rounded out the top ten.

The 15 lap Sportsman feature had a twist right at the start.  Heat winner AJ Martino decided to spot the field and start at the rear.  He only had the assistance of one caution, and it proved not to be enough.  Chris Bonoffski lead from start to finish and won over Martino by a few car lengths at the end.  Ryan Barrett was a close third at the end of the event.

Next week finds the first DIRTcar Sportsman Series event in all the Northeast and Canada.  The Central Region lid lifter will pay the winner $1,000 to win.  A big field of sportsman cars will be on hand for the 30-lap feature event.  They will be joined by the first event of the 2020 season for the Dirt Track Digest DIRTcar 358 Modifieds.  The powerful cars will start their points campaign next Sunday.