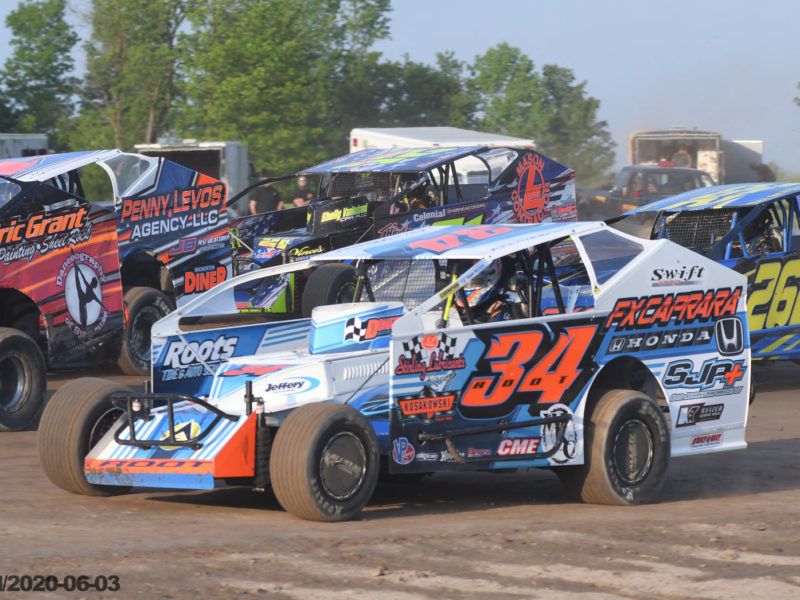 VERNON, NY – The Utica-Rome Speedway last held a racing event back in January before the COVID-19 crisis hit New York State.  That was the only race to be held in New York prior to the shutdown.

On Wednesday night, the Utica-Rome Speedway brought New York State racing back to life with the Conquer Corona 30 for the Broedel Fuel Group DIRTcar Sportsman and Ted’s Body Shop DIRTcar Pro Stocks in a show presented by Finish Line Design and Precision Hydraulic and Oil.

Root was initially scheduled to start fourth in the 30-lap DIRTcar Sportsman feature, but an opening lap caution put him on the outside front row for the green.  Root wasted little time in getting to the point as he secured the lead in the feature off of the second corner.

He was challenged in the opening stages by third starting Chris Mackey.  The pair battled hard in the first third of the race before caution was necessary for Tucker O’Connor.  O’Connor clipped a yuke tire on the inside of the speedway.

Root bolted away at the green and had a healthy advantage by the time the race reached halfway.  Behind him a torrid battle occurred for second as Zach S0botka, Matt Janczuk and Mackey all diced for the spot.

On lap 20, Sobotka was able to wrestle the second position away with Mackey and Janczuk remaining glued together for third.  With Root and Sobotka pulling away, the race battle for third continued.

Root entered traffic four laps shy of the conclusion, making a daring three-wide move a lap later to solidify his lead and the win.  Sobotka finished second with Janczuk utilizing a slide job to get by Mackey for third on the final lap. Mackey settled for fourth with Brian Calabrese finishing fifth.

“We had such a great year last year we didn’t want to make changes,” stated Root.  “Talking to Scott Jeffery and Randy Williamson we decided to change this whole car over.  I won’t say I think it’s the best car, but to come out of the box like this;  I’m liking it.”

In took a couple tries, but once the DIRTcar Pro Stocks got the green Chad Jeseo bolted to the front spot.  Jeseo was strong in the opening laps holding a comfortable lead over Luke Horning and Josh Coonradt.

As the laps clicked off, Horning closed the gap on Jeseo.  He stalked Jeseo for several laps before making his move.  That move came on lap 15 as Horning used as slider in turns one and to assume the lead.

It was a dogfight to the finish as the top three remained close together with Horning keeping Coonradt and eventually Nick Stone behind him.

Horning went on to lead the final 15-laps for the $1,000 win over Coonradt, Stone, Beau Ballard and Jeseo who recovered from a lap 18 flat tire.

Fink wasted no time getting the lead in the Sportsman B-Main.  He started from the fourth spot and took the lead on lap two.  He was never challenged the rest of the way for the victory.  In the Rookie Sportsman, AJ Martino led all 15-laps while on his way to his first win in the division.

Please stay tuned to the Utica-Rome Speedway website for information regarding upcoming events at the speedway.  Currently the speedway is looking at future options for our next event.  Details will be released on our website and social media platforms.