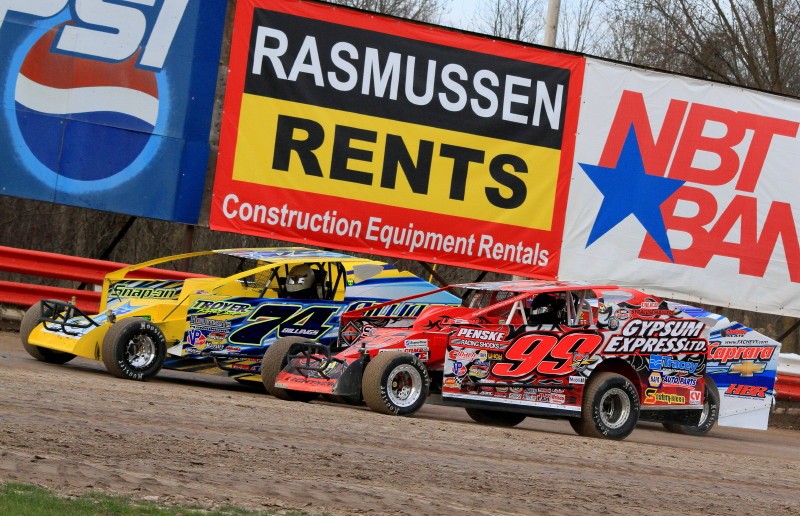 VERNON, NY- After an exciting opening night, Utica-Rome Speedway will return to action this Sunday night, April 26, with another round of NASCAR Whelen All-American Series racing. Gates-Cole Insurance will present a regular show of Stampede Steakhouse Modifieds, 602 Sportsman, Open Sportsman, and Pro Street Stocks. Race time is set for 6 p.m. with gates opening at 3:30 p.m. Kids 16 and under will be admitted for free.

After a pair of exciting Stampede Steakhouse Modified features this past Sunday, Stewart Friesen is the early point leader after a win and a top five finish, just four points ahead of Larry Wight who was the only other driver who had top five finishes in both events. Pat Ward, Erick Rudolph, and Matt Billings round out top five point spots followed by Danny Johnson, Justin Haers, Matt Sheppard (winner of the first feature), Tim Fuller, Vic Coffey, and Mat Williamson (tied for 10th). With the season just getting underway, the standings will change greatly throughout the season and if the past several seasons are any indication, it should come right down to the final night to decide who will win the $13,000 track championship.

Opening night saw Rocky Warner cap off his weekend with his third win in three days in the 602 Crate Sportsman, but it came right down to the checkered flag as AJ Filbeck through everything he had at him and finished a very close second. Alan Fink, Matt Janczuk, Dave Marcuccilli, John Scarborough, Cody Clark, Ron Davis III, Connor Cleveland, and Daryl Nutting were the top finishers this past Sunday. If the first night of weekly competition is any sign what to expect, the features should be exciting every week.

In the Open Sportsman, 2014 Track Champion Jeremy Vunk found himself in a familiar spot as he sat in victory lane but this one didn’t come easy. Steve Way tried valiantly to make the winning pass but was just short as the pair took the checkered flag. This was another feature event that was in doubt until the finish. Heath Carney, Jack Miller, Mike Stiles, Randy Shantel, Tom Tophoven, Mike Richmond, Cory Pike, and Lucas Heintz filled out the top ten spots.

While all the open wheeled classes had their feature events coming to the final lap before a winner was decided, Mark Effner left little doubt on who the was going to win the Pro Street Stock main event. Leading from the drop of the green flag, Effner looked like he was on cruise control as he raced away to take the win over Mike Welch, Chris Carr, AJ Digsby, Roch Aubin, Bill Mason, Shawn Frost, Glenn Forward, Gus Hollner, and Bill Trexler III.

Handicapping will start this week which will make for even more exciting racing as the winners from this past week will have to fight their way forward to compete for the win.

Utica-Rome Speedway is located in Route 5 just east of the Village of Vernon, just minutes from the New York State Thruway. Operating weekly on Sunday evenings plus some special events, Utica-Rome Speedway offers weekly NASCAR Whelen All-American Series racing for the Stampede Steakhouse Modifieds, 602 Sportsman, Open Sportsman, and Pro Street Stocks. More information including full season schedule, pricing, and much more is available at www.uticaromespeedway.com. Utica-Rome Speedway can also be found on Facebook and Twitter. The speedway office can be contacted by calling (315)829-4557.