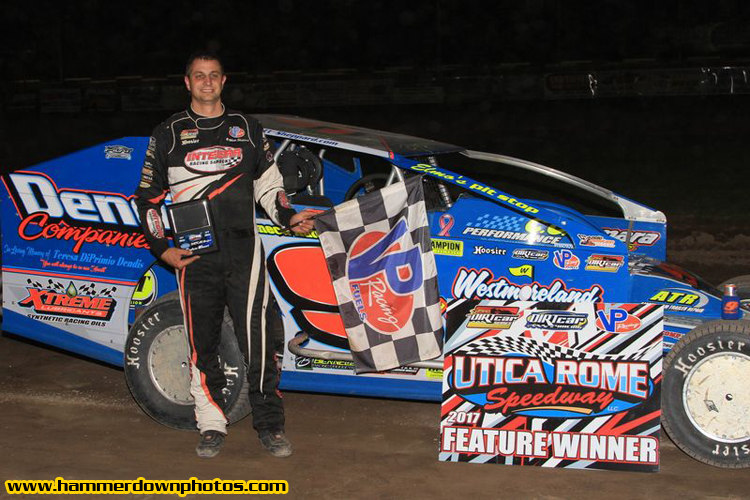 The Gates-Cole Auto Insurance 30-lap DIRTcar Modified feature got underway with Jack Miller attacking the lead at the drop of the green flag after starting on the outside of the front row.  Miller paced the field for the first handful of laps as Pat Ward moved in line behind him after starting sixth.  Ward stayed there until lap five when he went to the high-side of turns three and four to take the lead.

Ward was challenged immediately as he felt pressure from Marc Johnson.  Johnson looked low several times as Ward worked the outside of the speedway.  Ward kept Johnson at bay with the caution slowing their battle.  Mike Maresca slowed in turns three and four with mechanical issues.

At the green, Ward resumed his lead with Sheppard challenging Johnson for the second spot.  Eventually Sheppard was able to wrestle the second spot away from Johnson on lap 18.  Ward was in traffic as Sheppard got right to his back bumper.  Ward got boxed in and Sheppard went to the lead in turns one and two on lap 19.

Now the leader, Sheppard checked out in traffic as Ward searched for a groove that would allow him to possible challenge for the top spot again.  It was all for naught.  Sheppard went on the take home the victory. Ward ended up finishing in the second spot.  Danny Varin finished in third followed by Johnson and Tim Fuller in fifth.

The Lucas Oil Empire Super Sprints made their first ever of three appearances on Sunday night with Modified regular Danny Varin earning the victory.  Dylan Westbrook had the early lead before relinquishing it to Jason Barney on lap two.  Barney, coming of a win the night before, was strong in the early portions of the night.  Varin was quickly into second after starting fourth.  Barney’s lead began to shrink once he hit traffic on lap eight.  That was Varin’s chance as he closed in.  Barney got bottled up in traffic on lap 11 and Varin took advantage to grab the top position in turns one and two.  Before another lap could be completed the caution came out for a spinning Matt Billings.

Varin was superb at the green, he kept Barney at bay in second.  They raced side-by-side for three laps before Varin finally pulled away by a couple of car lengths.  Like Barney early in the race, Varin found traffic on lap 19.  Varin made the necessary moves to work through traffic.  Barney got close but couldn’t make a move to resume the lead while dealing with Coleman Gulick.  Gulick, who redrew 11th, made his presence felt in the final couple of laps.  He worked over Barney.  At the checkered was Varin who earned the victory.  Barney finished second with Gulick in third.  Paul Kinney finished fourth and Shawn Donath rounded the top five.

In the 20-lap DIRTcar Pro Stock main, Jim Normoyle started on the point and took the lead at the green.  He raced in front early as the eighth starting Welch began marching forward.  Welch moved into the top five by the halfway point.  Normoyle continued to hold the top but Welch was coming closer.  He took second on lap 13 before challenging Normoyle.  They raced to the line side-by-side on lap 14 before Welch got the lead with a slide job in turns three and four.  Welch was gone at that point.  He took career win number seven.   Normoyle finished second with Shane Henderson, Nick Stone and Todd Hoffman completing the top five.

30 cars took the green in the Broedel Energy DIRTcar Sportsman 20-lap feature.  Dave Moyer utilized his front row starting spot to lead the first lap of the feature.  Fink wrestled the lead away from him on the second circuit as they exited the second corner.  Fink led but Moyer stayed strong as he hung right with him.  Moyer retook the lead briefly before the red flag came out as Charlie Tibbitts got over in turns one and two.  He wasn’t injured.  The red flag negated Moyer’s pass for the top spot.  Fink wouldn’t make a mistake again as checked out on the field once the green flag was displayed.  Fink led the final 10 laps to take his first career Utica-Rome Speedway win.  Matt Janczuk tried to no avail after starting 17th to finish second.  Brent Joy finished third with Moyer fourth and Chris Mackey fifth.