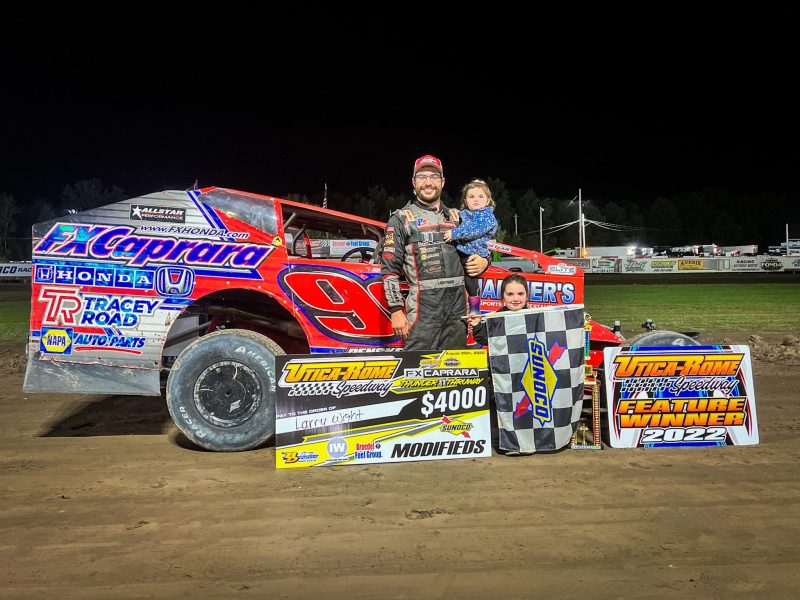 After a two-hour rain delay to start the night, the Monrovia, Ind., native claimed the $10,000 top prize, and his first Sprint Car win at the ‘Home of Heroes’ on Broedel Energy and International Wire night at the speedway before a standing-room-only crowd.

“It just seems like our car comes to life about 10 laps into the race,” explained Peck of his dominant race car. “When everything starts working like it should, it’s a dream to drive.”

Following the Dash, Peck started from the outside the front row, alongside one of 410 Sprint Car racing’s hottest drivers in Myerstown, Pa.’s Brent Marks.

Marks fired off to lead the opening laps, while Peck was fending off challenges from Indianapolis, Ind.’s Tyler Courtney for the runner-up spot.

Marks raced out to a healthy advantage in the opening five laps, before Peck began to mount his charge and brought Courtney with him, making it a three-car war for the top spot.

The leaders caught the back of the field on the eighth circuit, bringing Peck and Courtney right to the back bumper of Marks.

Courtney was the first to make a move, continuing the roll the bottom groove and used that to drive underneath Peck for second just before they got into traffic with Marks.

Marks held the advantage into the third turn, but it was Peck who led the field off the fourth corner. Peck ripped the outside cushion to perfection, racing around both Courtney and Marks to take the top spot.

Peck began to stretch his advantage over Marks and Courtney, just as a three-car battle was heating up just outside the podium.

Cory Eliason, Chris Windom, and Zeb Wise began to trade positions in a dog fight for the fourth position.

The race’s first yellow came out on lap 17, as Larry Wight slowed to a stop with an expired engine. Wight’s night would improve a little later, however.

On the ensuing restart, a curveball was thrown at the drivers, as a red flag lasting just under 20 minutes occurred. Fonda, N.Y.’s Danny Varin was sent over the turn-three embankment and slid all the way into the woods.

After a challenging cleanup, track officials were able to retrieve Varin’s car, and the Empire State local walked away unscathed.

When the race resumed, Peck picked up where he left off without a hiccup. Peck, who set the track record in time trials with a time of 14.711 seconds, negotiated lap traffic flawlessly and raced away with the $10,000 paycheck.

Courtney raced down Marks and took the runner-up spot.

“Thanks to all these fans in New York for coming out and supporting us, I know we don’t come up here often but it’s awesome to see this turn out,” Courtney proclaimed to the robust crowd after his second-place finish.

Marks rounded out the podium finishers after a win on Friday night with the ASCoC.

“I liked the clean air more than the traffic tonight, usually our car is really good in traffic, but we just missed it tonight,” explained Marks of his podium run.

Phoenix, N.Y.’s Larry Wight relieved the disappointment of the blown engine in the Sprint Car with a $4,000 Sunoco Modified victory in the finale of the F.X. Caprara Car Companies Thunder on the Thruway Series.

Wight, who started 10th, claimed his first win at the Route 5 oval in nearly five years.

“We definitely miss coming here, the track is phenomenal,” said an elated Wight of his enjoyment of Utica-Rome Speedway. “With all the rain we had, hats off to the track crew for being able to pull this off.”

Wight started outside the fifth row following the redraw for starting position but wasted little to no time charging to the front.

Wight was into the top five in the opening two laps and got to fourth at the completion of the third lap.

Out front, Unadilla, N.Y.’s Billy Decker was fighting with East Greenbush, N.Y.’s Bobby Hackel for the top spot. Decker used the outside lane to get around Hackel and slowly pull away with the lead.

A lap-six yellow gave Wight a restart he would take full advantage of. Going from the fourth position on the restart, Wight picked off Edwards, N.Y.’s Tim Fuller and Bobby Hackel to move into the runner-up spot.

Another restart one lap later gave Wight the shot he wouldn’t miss for the top spot. Once again Wight rolled the outside to drive by Billy Decker for the lead, going from 10th to first in just seven laps.

Decker began to change his line after Wight went around him, keeping pace with Wight as the two dueled for the lead.

Eventually Wight flexed his muscle, pulling away with a commanding win, as the final 23 laps fired off caution free.

Decker held on the for the runner-up spot, and 10-time winner Matt Sheppard had a quiet third-place finish.

Covington Township, Pa.’s Alex Yankowski claimed the fourth position. The finish was good enough to crown ‘Kid Rocket’ as the Thunder on the Thruway Series champion for the Modifieds.

Baldwinsville, N.Y.’s Jimmy Phelps rounded out the top five aboard his HBR Racing No. 98H.

Finishing sixth through 10th, respectively, were: Sprakers, N.Y.’s Stewart Friesen, who raced from the 21st starting position; Tim Fuller, who faded to seventh in his St. Lawrence Radiology No. 19; Bobby Hackel, aboard his family-owned No. 97; Queensbury, N.Y.’s Demetrios Drellos aboard his family-owned No. 111; and Hartford, Conn.’s Chris Curtis rounded out the top-10.

Janczuk fired from the pole starting position for the 25-lap main event and never relinquished the lead for the $1,500 payday.

Despite several restarts with Payton Talbot alongside, Janczuk remained unphased, claiming his tenth victory of the season.

Talbot, of South New Berlin, N.Y., came home in the runner-up spot, good enough to crown him as the Thunder on the Thruway Series champion for the Crate 602 Sportsman.

The Next Generation Graphix Pro Stocks ran what was arguably the best feature of the night in their 20-lap feature.

Grand Gorge, N.Y.’s Beau Ballard emerged from a three-wide battle on the final to top the field and grab the $1,000 victory.

Newport, N.Y.’s A.J. Walters beat Gloversville, N.Y.’s Luke Horning by a nose to round out the podium finishers.

Sixth-place finisher Nick Stone of Schenectady, N.Y., was awarded the Thunder on the Thruway Series championship for his efforts over the six-race series. Stone won the first four Series races to secure the championship.

Friday night racing resumes on August 26 at Utica-Rome Speedway as the five weekly divisions return to action along with the Mohawk Valley Vintage Dirt Modified Series.