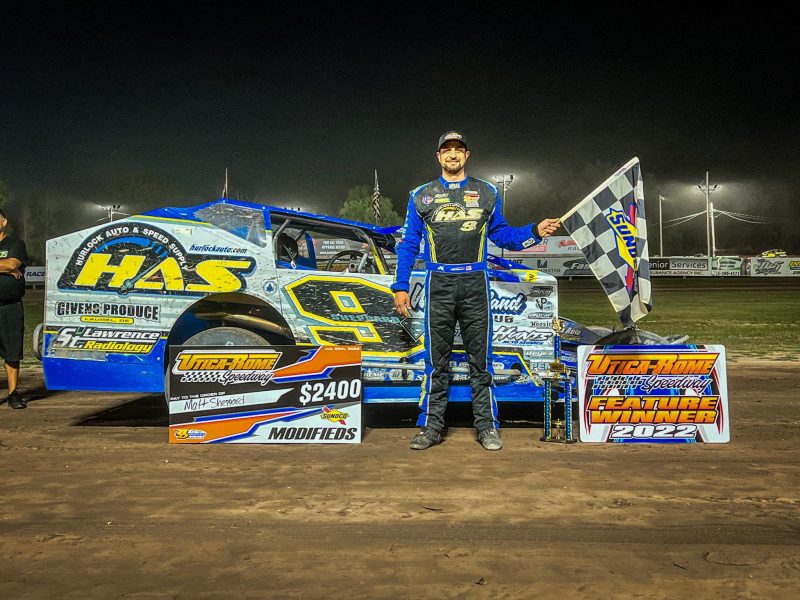 VERNON, NY – Matt Sheppard continued his dream season on Friday night, claiming his eighth Sunoco Modified win of 2022 at Utica-Rome Speedway and the $2,400 paycheck to go with it on Senior Services Inc. night.

Sheppard raced from his 10th starting position, taking the lead at the completion of the 14th circuit, and driving away with a dominant victory.

“Every once in a while, we get on one of these rolls and all I can say is you’ve gotta ride it while you’re on it,” explained Sheppard of his magical ’22 campaign.

“It seems like the longer the race goes the better our car gets no matter what the condition (the track) is,” said the Savannah, N.Y., native of the strength of his car each week.

Sheppard’s eight wins and counting this season have moved his career total to 56 Utica-Rome Speedway victories, five short of the all-time high.

With Sheppard going from outside the fifth row, Plattsburgh, N.Y.’s Nick Heywood and Oneida, N.Y.’s Randy Shantel led the field to the green.

The pair occupied the fourth and fifth positions at the completion of the second circuit. One lap later Bachetti and Warner slid by Will Shields, and Sheppard joined the pair to take the fifth spot away from Shields.

Heywood continued to set the pace with a quickly closing Alan Barker, of Norwich, N.Y., beginning to challenge Heywood for the lead.

Warner appeared to be the car to beat in the early going, as the ‘Flying Squirrel’ drove by Barker and Bachetti on lap seven to take the runner-up spot after starting in ninth.

Warner, now running second, set his sights on Heywood up front, while Sheppard continued to pick cars off one at a time to keep pace with Warner.

Warner used the inside line to race by Heywood and take the lead away, putting two cars between himself and Sheppard. The buffer between the two wouldn’t last however, as Sheppard was by both Bachetti and Heywood at the completion of lap 11.

Sheppard went to work to get by Warner, racing to the outside groove and showing a nose to Warner on the top groove. Warner then changed lanes, leaving the bottom side of the speedway open for Sheppard.

“He was really good,” said Sheppard of Warner and their race for the lead, “I think he just got caught in one of those deals where he didn’t know where to run. Once he moved up a little bit that opened the door for me.”

That opened door was all it took for ‘Super’ Matt as he raced underneath Warner and drove away from the field for a dominant victory in the caution-free 30-lap Sunoco Modified feature.

Warner took home second in his Jason Simmons Racing No. 98 machine in what was one of his strongest outings of the season. Covington Township, Pa.’s Alex Yankowski used a late-race charge to take third aboard his family-owned No. 84y. Bachetti snagged a fourth-place finish in his Garrity Asphalt No. 4 and Unadilla, N.Y.’s Billy Decker raced from 20th after driveline issues in his heat race to come home fifth aboard his Jeremy Smith Racing No. 91.

Finishing sixth through 10th, respectively, were: Middlesex, N.Y.’s Alan Johnson piloting the Mark Spoor-owned No. 14J; Genoa, N.Y.’s Pat Ward in the Beyea Custom Headers No. 42p; Sprakers, N.Y.’s Jessica Friesen in her One Zee Tees No. 1z entry; Vernon, N.Y.’s Willy Decker in his JSD Express No. 1x; and Heywood in the Wes Moody owned No. 24H rounded out the top-10.

A pair of early yellows gave Janczuk restarts to pick positions off en masse. Once the field got going, Janczuk raced around Brent Joy for the lead on lap 9, taking the lead and never looking back.

Rome, N.Y.’s Chris Mackey made a mid-race charge to the front and used it to finish in the runner-up spot. Fultonville, N.Y.’s A.J. Miller rounded out the podium and South New Berlin, N.Y.’s Payton Talbot raced from his 20th starting position to come home fourth. Sherburne, N.Y.’s Allan Hodge rounded out the top five.

Fort Johnson, N.Y.’s Josh Coonradt claimed his third win of the season with the Next Generation Graphix Pro Stocks. After multiple late race restarts and battles with Averill Park, N.Y.’s Jay Corbin, Coonradt came out on top for the 20-lap victory.

Staelens took the runner-up spot and Eric Jensen rounded out the top three.

Donald Kimball took home his first Fonda Fair Four Cylinder victory of the season, leading all 12-laps to take the win. Wayne Russell Jr. was the Single Cam winner of the event, his first of the season as well.

Did Not Start: JaMike Sowle