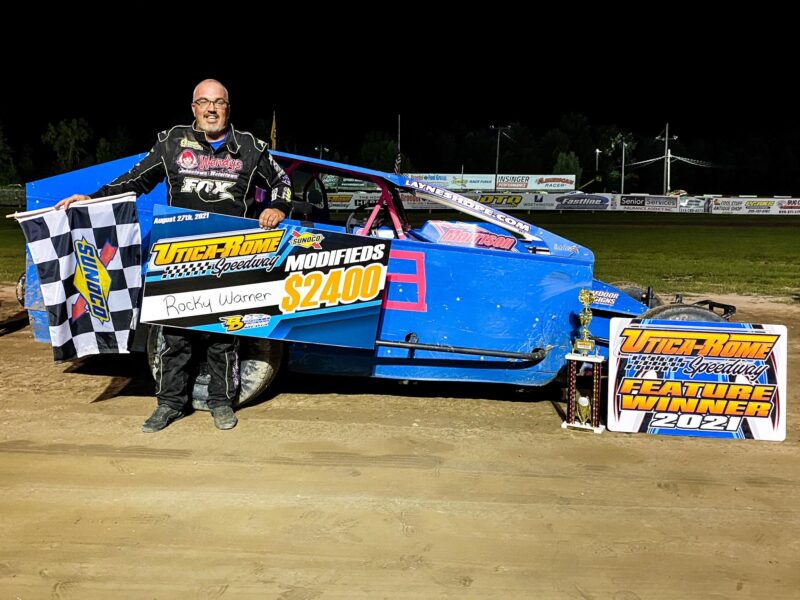 VERNON, NY – Race of the year!

Johnstown, N.Y.’s Rocky Warner picked up his second Sunoco Modified win of the 2021 season at Utica-Rome Speedway, in what was arguably the race of the year.

Four different drivers led the 30-lap main event on Senior Services Inc. Night, with the top-seven cars within half a straightaway of each other at the halfway point, as Warner bested the stout 25-car field.

“Racing with Stew (Friesen) and Jess (Friesen) is a lot of fun, they’re clean racers and have had great cars… we’ve had some issues recently but we got things figured out tonight and were able to beat them,” an elated Warner explained in Victory Lane.

Warner slipped by Sprakers, N.Y.’s Jessica Friesen in the late stages to claim the $2,400 paycheck, while Stewart Friesen charged from the back after an early race mishap to finish runner-up.

After a pair of yellows on the initial starts, the field got lap one complete before Stewart Friesen got up and over the turn one and two banking, sending him to the back, while Rocky Warner had quickly worked to second, alongside Alan Johnson.

When the field went back to racing, Warner made the mistake, getting up and over the top of turns one and two, allowing Binghamton, N.Y.’s Darren Smith and Jessica Friesen to both slide by.

On lap nine, Darren Smith got underneath Johnson and led for a moment before Johnson drove back around him. While the leaders swapped the top spot, Warner, Jessica Friesen, and Savannah, N.Y.’s Matt Sheppard joined the lead duo.

The top five were nose-to-tail on lap 10, all while closing in on lap traffic, bringing two more cars into the fray, as Sheffield, Mass.’s Andy Bachetti and Stewart Friesen closing in on the battle for the lead.

At the halfway point, Warner slid by Johnson to take the lead and Jessica Friesen followed him to second, as the lead pair began to swap the lead for the second half of the race.

As Alan Johnson began to fade, Sheppard and Stewart Friesen both worked their way to third and fourth.

While Friesen and Sheppard were working forward, the other Friesen, Jessica, stole the lead away from Warner and began to open her lead working through lap traffic.

Lapped traffic however would ultimately be Jessica’s undoing. Jessica struggled as the slower cars ran her lane on the bottom, and Friesen got stuck in the middle as Warner continued to roll the outside of the half-mile speedway.

Warner drove around Friesen for good on lap 22, walking away to his second win of the season at the ‘Home of Heroes’ in his Jason Simmons-owned No. 98.

Stewart Friesen came up a few laps short, winding up second in his Halmar International No. 44. Savannah, N.Y.’s Matt Sheppard had a quiet third-place finish in his Hurlock Auto & Speed Supply No. 9S.

Jessica Friesen faded to fourth in the One Zee Tee’s no. 1Z and Alan Johnson held on for fifth in his Friendly Ford No. 14J.

Fonda, N.Y.’s Danny Varin’s return to Modified racing was a successful one, grabbing sixth in the Ed Monger No. 93. Last week’s winner Andy Bachetti came home seventh in the Garrity Asphalt Reclaiming No. 4 and Vernon, N.Y.’s Willy Decker grabbed the eighth spot in his JSD Express No. 1X. Darren Smith faded to ninth in the Jeremy Smith Racing No. 12 and Fultonville, N.Y.’s JaMike Sowle rounded out the top ten in the Carol and Alton Palmer owned No. 76.

The Worthington Industries Crate 602 Sportsman joined the Modifieds, putting on a thrilling 25-lap race, as South New Berlin, N.Y.’s Payton Talbot got his third win of the season.

Talbot emerged from a four-car battle inside of five laps remaining, using the outside line to drive around the other three and claim the win.

Talbot’s winning move came with three laps to go, splitting the middle of a three wide battle for the lead between himself, Addison Bowman, and Brian Calabrese.

Schenectady, N.Y.’s Nick Stone grabbed his ninth 20-lap Next Generation Graphix Pro Stocks win of the season and pulled to within 10 points in the championship chase with one night remaining.

West Milton, N.Y.’s Josh Coonradt stalked Stone for much of the second half of the race, but could never offer a challenge, coming home with a runner-up finish. Kenny Gates returned to Utica-Rome Speedway after his victory in his last appearance to grab a podium finish.

West Winfield, N.Y.’s Jeremy Slosek continued his ascent in the Fastline Performance Limited Sportsman division, claiming his second win of the season in the 15-lap feature.

Slosek made a last-lap, last-turn pass to get by Rotterdam, N.Y.’s Clayton DuMond for the win. Baldwinsville, N.Y.’s David Hackett Jr. also slipped by DuMond to grab second while Clayton settled for a podium finish.

With the second and third place finishes, Hackett Jr. and DuMond head to championship night next Friday tied for the championship.

The Cool Stuff Antiques Four Cylinders joined in on the fun, as Justin Pope used the bumper to pick up a last-lap pass of Slappy White to win his ninth feature event of the season and extend his point lead in the 12-lap main. Jacob Kimball was the Single Cam winner of the Four Cylinder feature.

The runner-up however was good enough to give Putnam the championship for the All-Star Slingshots.

Corky Warner won his fourth D&S Landscaping Junior Slingshots feature and won the championship, holding Victory Lane all to himself after the 15-lap main on the inner oval.

Did Not Start: John Holmes.