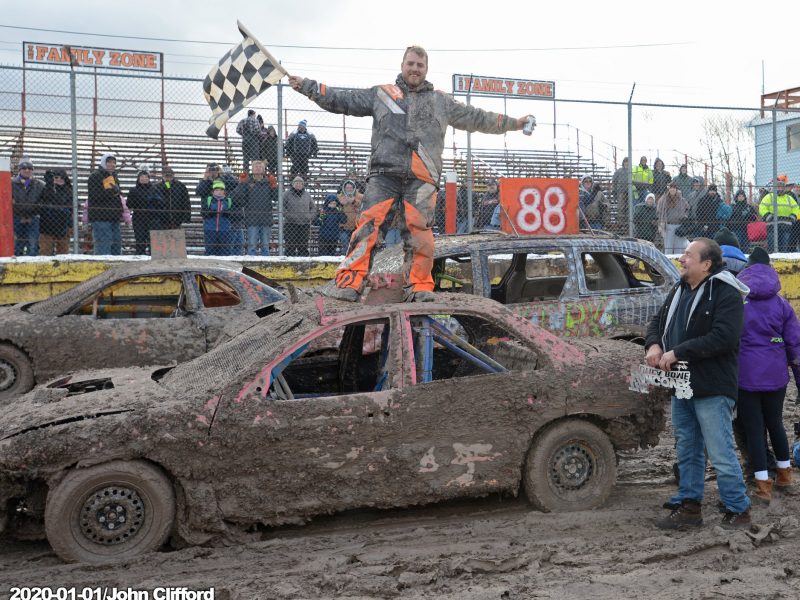 VERNON, NY – Chris Mackey captured the first running of the Hangover 2.0 at the Utica-Rome Speedway on Wednesday afternoon.  Mackey inherited the lead and survived to pick up the $500 win.

Nearly 70 cars made up the starting field with several drivers taking their turn at the front of the pack.

Jim Bleau led the race early from the front row at the drop of green flag from event creator Loren Fish.  Bleau began to overheat and stopped handing the lead over to Tim Ellison. Ellison battled with Harold Humphrey before Ellison eventually overheated as well.

That put Humphrey at the front with Austin Susice also in the mix.  These two battled hard before both went by the way-side with issues giving Brian Hill the position.

Eventually Hill’s No. 29 gave out.  From there Dustin Baerman earned the lead only to get stuck on the bottom of the race track in turn one.  Mackey, who had problems early, rebounded to make up lost laps before outlasting them all earning the checkered flag.

Jonathan Holmes was the only car running at the end finishing in second followed by Baerman, Hill and Susice.

The Utica-Rome Speedway would also like to thank the drivers, fans and staff for all their hard work in pulling off the event.  We look forward to an exciting 2020 at the track.

Highlights of the event courtesy of DirtTrackDigest.tv.